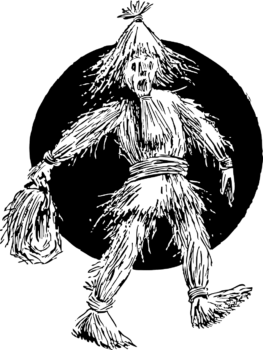 October always makes me think of scarecrows, those human-shaped figures usually made of straw placed on open fields to discourage birds from feeding on newly sown seeds. They make for popular Halloween costumes, and they often find their way into horror movies.

Straw is really the dried remains of harvested crops, like wheat or oats. It is typically bundled into bales, which are then tied together by twine or wire, usually in large square or round shapes. It is used to make baskets, hats, biofuel, scatted on floors as bedding, and as feed for horses and other barn animals.

We get the word straw from the Old English word streaw. It meant to scatter, just as straw was scattered on the dirt floors in ancient times to absorb the damp and the cold.

But, did you know that straw is also a popular topic for English idioms and terms? It comes up often in conversation. Let’s take a look at some of the many ways straw has managed to become part of everyday English language.

You’ll hear this phrase, or the similar final straw a lot. It means that a series of bad events or situations have taken place, and now a new one has occurred, and it is time to take action to make things better. Imagine, for instance, that a co-worker is always late to meetings, takes things from your desk without asking, leaves work early, and never responds to your emails. Then, you catch this person taking your lunch out of the refrigerator at work and eating it! That’s the last straw! You are going to complain to Human Resources.

The phrase comes from another straw-related idiom.

This refers to an old proverb about a poor camel that has been forced to carry many heavy parcels and other items on its back for miles. When someone places just one piece of straw on top of everything else, it is too much for the camel and it slumps to the ground.

When nothing seems to work and failure seems probable, a desperate person will try anything. A drowning person will grab at the straw reeds in the water to try to stay above the surface, although that offers no chance of actually working. From this we get the very popular expression, He’s just grasping at straws.

When a single straw gets caught in the wind it can blow in any direction. When people change their opinions based on popular public attitudes, they are said to be like a straw in the wind.

This leads us to another common term with the word straw.

Informal polling of people’s opinions on one or more topics, often conducted by newspapers and other media outlets, is called a straw poll. It reflects only how some people feel at a particular time, and is not in any way official.

A scarecrow is a man of straw. It’s not a real man, is lightweight, can easily be tossed around, and has very little substance to it. If someone is called a man of straw, he has no character and is unreliable. In some cases, it also refers to someone who cannot pay back a loan.

Here’s an interesting phrase. Drawing straws is an ancient method to determine something totally at random. Let’s say you want to decide who among five people will be the sober driver at the end of a night of partying. You get five pieces of straw of equal length, break one straw in half, then hold the five pieces of straw in a tight fist so that they all appear to be the same length. The person who pulls out, or draws, the short straw must then be the sober driver while the other four get to drink. It means to be unlucky.

Finally, I have to mention the other kind of straw – the kind that you use for drinking. They may be plastic, glass, or metal. They may be long or short, thin or wide. But, when served with a mixed cocktail, they are used to stir up the contents. On a sports team, in a business, or in any diverse group of individuals, there is always a leader who keeps things moving and interesting. We say that leader is the straw that stirs the drink.

I hope that you’ve enjoyed these idioms. Were any of them new to you? Have you ever heard them before and wondered what they meant? Please let me know in the Comments box below.