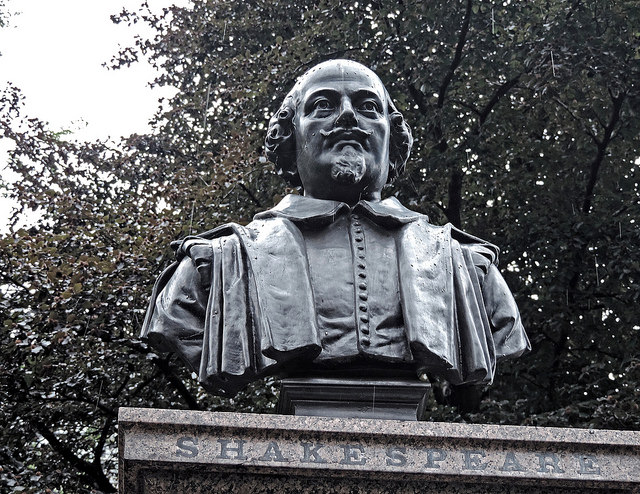 Image by DncnH on Flickr.com licensed under CC BY 2.0.

This year marks the 400th anniversary of Shakespeare’s death and the English-speaking world is remembering this amazing author in many ways. Although there is some debate about who the man William Shakespeare actually was, most people know him as one of the greatest English poets, playwrights (a person who writes plays), and actors that ever lived.  He is often called “England’s national poet,” but his influence stretches far beyond England. English speakers around the world, and English as a Second Language speakers, frequently study and fall in love with his poems and plays. Although his works can be hard to read at times, as the English language has changed a great deal in the last 400 years, his writing is still beautiful and full of meaning.

What many people don’t know is that some of our everyday speech also comes directly from Shakespeare. Some of the lines from his plays and poems have become so widely used they are now part of our common vocabulary. Today we are going to look at 10 such phrases. Some of them may be new to you as an ESL learner, but all of these phrases are good ones to learn as they are heard regularly in common conversation.  So, let’s learn to speak like Shakespeare!

to lie low – keep out of sight; to hide
Example: The thieves tried to lie low after the robbery, but the police found them anyway.
(From the play Much Ado About Nothing)

a sorry sight – someone with a messy or sad appearance
Example: After the 5-day camping trip the boys were a sorry sight.
(From the play Macbeth)

mum’s the word – both a request and a warning to say nothing
Example: Remember, mum’s the word about the surprise party this weekend.
(From the play Henry VI, Part II)

to catch a cold – to get sick with a cold
Example: I caught a cold from my son.
(From the play Cymbeline)

to be in stitches – to laugh very hard
Example: The movie had us in stitches.
(From the play Twelfth Night)

all of a sudden – immediately, happening quickly
Example: It happened all of a sudden; I didn’t really see anything.
(From the play The Taming of the Shrew)

to break the ice – to initiate a friendship, to start a conversation with someone you don’t know
Example: I tried to think of something funny to say to break the ice.
(From the play The Taming of the Shrew)