The Eruption of Mt. Saint Helens Posted by Gary Locke on May 6, 2021 in Culture, Travel & Geography 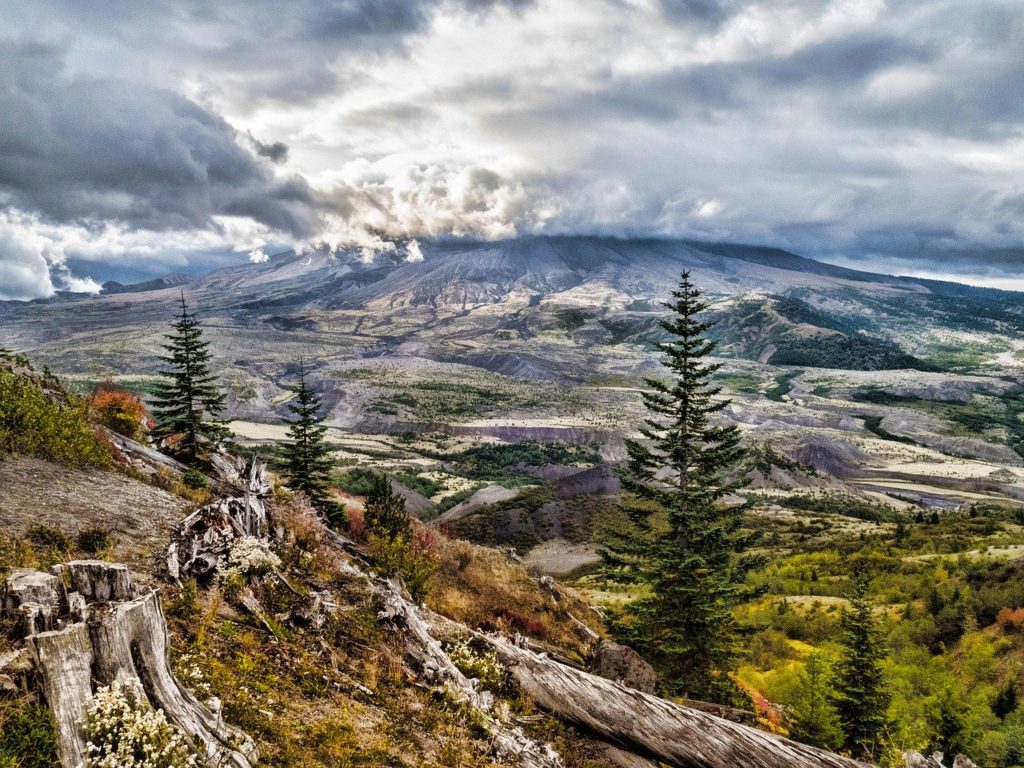 Image by Keith Hardin from Pixabay

In the United States, we rarely think about volcanos. Iceland, Japan, and several sites south of the Equator are seeing dramatic activity as I write this. A live, erupting volcano in the US, however, is quite rare, especially in the 48 contiguous states. Oh, sure, we all know about Kilauea in Hawaii and Alaska has some volcanic activity, but in the lower 48? It’s almost unthinkable. Almost.

In 1980, at 8:32 am on a beautiful Sunday in May, Mount St. Helens in Washington state erupted with shocking power and force. 57 people lost their lives, most of them instantly. The entire north face of the mountain collapsed, reducing the mountain’s height by over 400 meters. Over 230 square miles of rock, trees, and other vegetation were destroyed. Around 7000 animals and 12 million fish at a nearby hatchery were killed. The plume of ash, 15 miles high and 40 miles wide, spread across the country in 3 days and encircled the planet in 15 days.1https://www.usgs.gov/volcanoes/mount-st-helens/1980-cataclysmic-eruption?qt-science_support_page_related_con=2#qt-science_support_page_related_con

Remarkably, we knew that the eruption was coming. A series of earthquakes occurred in mid-March, increasing in number throughout the coming days until March 27, when a large steam eruption blasted a crater in the mountain’s ice cap. It was the first eruption at Mt. St. Helens in over 100 years. Hundreds more earthquakes and eruptions followed throughout April. Then, by the middle of May, a large bulge extending about 450 feet had formed on the north side of the mountain.2https://pubs.usgs.gov/gip/103/

However, nothing could prepare the locals for the rapidly evolving events of that fateful morning. An unprecedented 5.1 magnitude earthquake was accompanied by the largest landslide of debris in human history. Three million meters of material flowed 17 miles south into the Columbia River, the largest river in the Pacific Northwest. The resulting clog stopped river traffic for months and significantly impacted the economy. It was, by far, the most economically damaging volcanic event in the country’s history. 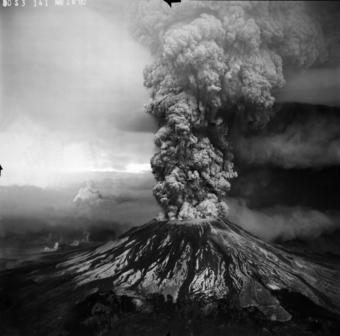 The cloud of ash turned daylight into pitch-black across the area. Streetlights automatically switched on. Over 2.4 million cubic yards of ash fell, and the cleanup was an enormous logistical project. Later, the tons of ash that fell were used to produce decorative ceramics and glass. I have many Christmas ornaments made from the ash. It was also used to make bricks and industrial filler.

We also remember the human cost. Eighty-three-year-old Harry Truman, who had lived at Mt. Saint Helens most of his life, refused to leave his home despite pleas from friends, family, and authorities. He became a celebrity in the weeks leading up to the eruption and his body was never found.

Volcanologist (the study of volcanos) David A. Johnston had been studying the mountain when the eruption occurred. He radioed to his team when it hit, “Vancouver! Vancouver! This is it!” Like Truman, Johnston’s body was never found.3https://en.wikipedia.org/wiki/Mount_St._Helens#Human_impact_from_the_1980_eruption

But, ecologically, the eruption of Mt. Saint Helens has been a wonder for scientists and revealed much about the resiliency of our planet. Although 90 square miles of forest were lost in the eruption, the biodiversity of ponds, rivers, and lakes in the area has increased fivefold. The erosion exposed hidden soil, which allowed for new plant growth and development.4https://www.livescience.com/6450-mount-st-helens-recovering-30-years.html

We’ve never seen anything like it, and we likely never will again in our lifetimes. At least, let’s hope not.