The Hill We Climb Posted by Gary Locke on Jan 21, 2021 in Culture, English Language, News 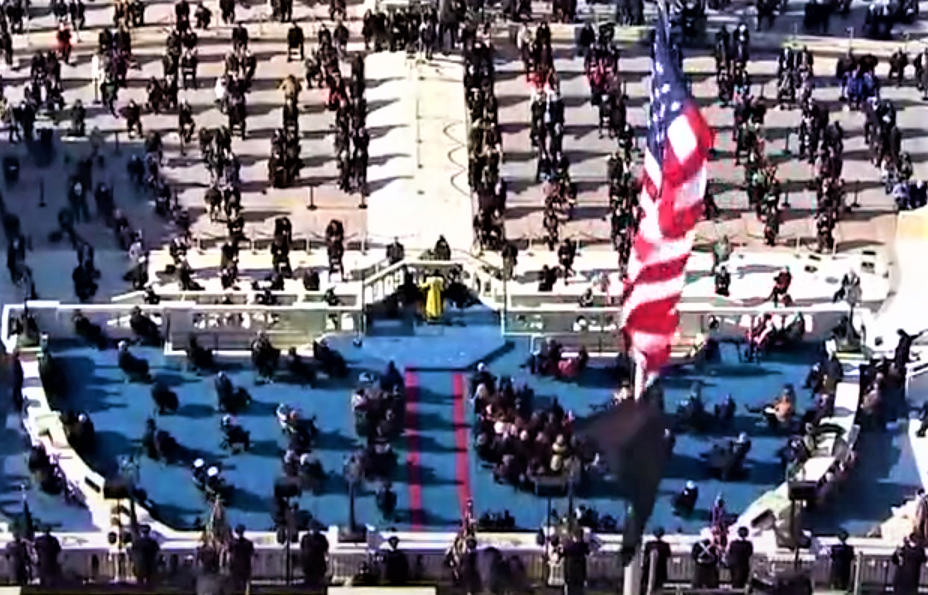 If you are studying the English language, you could not find a better example of its power than Amanda Gorman’s poem performed at the inauguration ceremony for President Joe Biden. The Hill We Climb is filled with rich imagery and figurative allusions from culture, history, and the Bible.

Gorman was writing her poem for the 2021 inauguration when an insurrectionist mob broke into the US Capitol building just two weeks before the ceremony. She said that was when the inspiration for the poem fully formed in her mind. The US Congress is known as Capitol Hill, so the hill in her poem is simultaneously a literal and physical manifestation. It is only the first of many ingenious literary devices at work in this piece.

Take, for example, her reference in the first stanza to the belly of the beast. You may know that the phrase alludes to the Biblical story of Jonah and the Whale. A drowning Jonah prays to God to save him, only to have a giant whale swallow him whole, trapping him in the belly of the beast. But it also means to be trapped in any hopeless situation.

She plays with words when she writes, “…what just is isn’t always justice.” And she references the Preamble to the US Constitution when she writes, “…that doesn’t mean we are striving to form a union that is perfect.” The founding fathers of our country understood that the country would always be a work-in-progress, and stated so by beginning the Constitution with these words:

“We the People of the United States, in Order to form a more perfect Union, establish Justice, insure domestic Tranquility, provide for the common defense, promote the general Welfare, and secure the Blessings of Liberty to ourselves and our Posterity, do ordain and establish this Constitution for the United States of America.”

It was a message the political leaders gathered together that day could not fail to notice.

Amanda Gorman is also a master of alliteration, that wordplay when sounds repeat themselves in a sentence or a few phrases. Look at the third stanza, where she speaks of polished, pristine, perfect, and purpose, then shifts to, “…compose a country committed to all cultures, colors, characters and conditions of man.”

I am in awe of this work. American music is represented here as well. Throughout the penultimate stanza, Gorman echoes the song, America the Beautiful, and what we find from sea to shining sea. And in her hip-hop cadence and with her words we remember the opening lines of Broadway’s Hamilton when she inserts herself into the poem as “…a skinny Black girl, descended from slaves and raised by a single mother” who can dream of being president one day, “…only to find herself reciting for one.”

There is so much to love in this poem. Please share your thoughts in the Comments box.

When day comes we ask ourselves, where can we find light in this never-ending shade? The loss we carry, a sea we must wade. We’ve braved the belly of the beast. We’ve learned that quiet isn’t always peace. In the norms and notions of what just is isn’t always justice.

And yet, the dawn is ours before we knew it. Somehow, we do it. Somehow, we’ve weathered and witnessed a nation that isn’t broken, but simply unfinished. We, the successors of a country and a time where a skinny Black girl descended from slaves and raised by a single mother can dream of becoming president, only to find herself reciting for one.

And so, we lift our gazes not to what stands between us, but what stands before us. We close the divide because we know, to put our future first, we must first put our differences aside. We lay down our arms so we can reach out our arms to one another.

Scripture tells us to envision that everyone shall sit under their own vine and fig tree, and no one shall make them afraid. If we’re to live up to our own time, then victory won’t lie in the blade, but in all the bridges we’ve made. That is the promise to glade, the hill we climb if only we dare it. Because being American is more than a pride we inherit; it’s the past we step into and how we repair it. We’ve seen a forest that would shatter our nation rather than share it, would destroy our country if it meant delaying democracy. And this effort very nearly succeeded.

But while democracy can be periodically delayed, it can never be permanently defeated. In this truth, in this faith we trust, for while we have our eyes on the future, history has its eyes on us. This is the era of just redemption. We feared it at its inception. We did not feel prepared to be the heirs of such a terrifying hour, but within it, we found the power to author a new chapter, to offer hope and laughter to ourselves.

We will not march back to what was, but move to what shall be: a country that is bruised, but whole; benevolent, but bold; fierce and free. We will not be turned around or interrupted by intimidation, because we know our inaction and inertia will be the inheritance of the next generation. Our blunders become their burdens. But one thing is certain, if we merge mercy with might, and might with right, then love becomes our legacy, and change our children’s birthright.