The Story of Scrabble Posted by Gary Locke on Jan 18, 2021 in Culture, English Language 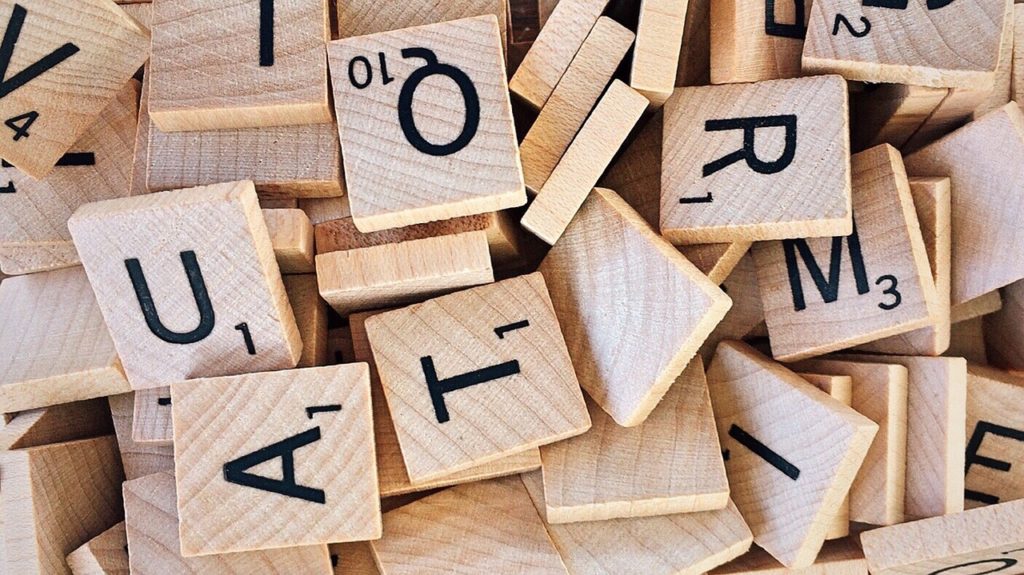 Image by Wokandapix from Pixabay

Chances are, you’ve played Scrabble. You know the 15×15 square board, with its 225 squares designed to accommodate 100 wooden tile pieces. 98 of the tiles are marked with a letter and the value of that letter in the lower-left corner. The remaining two wooden tiles are blank on both sides.

The value of each tile was determined by the game’s inventor, Alfred Butts, by tabulating the frequency the letters appear in English words. Letters like A, E, L, R, and S earn one point. The letter E appears in an estimated 11% of all English words.1https://www.rd.com/article/common-letters-english-language/ Butts knew that he needed to have that tile appear the most. However, in an effort to make the game more challenging, he limited the number of S tiles to only four.

Among the 225 squares, 61 are marked with special value designations.

The game also includes four wooden racks, or tile holders. At the beginning of the game, each player draws seven random and unseen tiles and places them on their rack, concealed from the other player(s).

The first word made in the game must be at least two letters long and cover the center square. All subsequent moves are made by placing one or more tiles on the board, somehow connecting to the tiles that have already been played. Players may play at right angles to a word, or even parallel to a word as long as adjacent letters form words horizontally and vertically.

Butts originally called his game Lexico, and it did not have a board, only the tiles. Later, Butts partnered with entrepreneur James Brunot to form the game board and to give it the name Scrabble, which is a real English word meaning to struggle to grasp or hold onto something. If you’ve ever played the game, you’ll know that this is a perfect description of what the game is like.

People have been playing Scrabble for over 80 years. It’s estimated that a version of the game can be found in about 1/3 of all American homes and in about half the homes in Great Britain.

The Unfortunate Confession of Seamus Heaney

I have a story about Scrabble that I love to tell. Many years ago I was lucky enough to get to know Seamus Heaney 2https://www.poetryfoundation.org/poets/seamus-heaney, the Nobel laureate and Irish poet. One very memorable Sunday, my wife and I were guests at a small dinner party with Seamus, his wife Mary, and two other couples. Much wine was consumed, and Seamus was, as always, the center of attention.

He and my wife began talking about their shared mutual affection for playing Scrabble. Soon, Seamus proclaimed that he had a special trick for winning at Scrabble. He had the Oxford English Dictionary on his computer at home. If he got stuck, he would excuse himself to go to the bathroom. His computer was next to the bathroom. Seamus would enter the letters on the tiles in his rack into the computer and the Oxford Dictionary would list the words that you could make with those letters.

Unfortunately for Seamus, this was the first time Mary Heaney ever learned of this. She was none too pleased. Fortunately, we all had some more wine and the evening continued amicably.

Maybe the next time you play a game of Scrabble, you’ll think of the grandmaster of letters, Seamus Heaney. But, don’t cheat. Or, if you do, don’t let your wife find out.