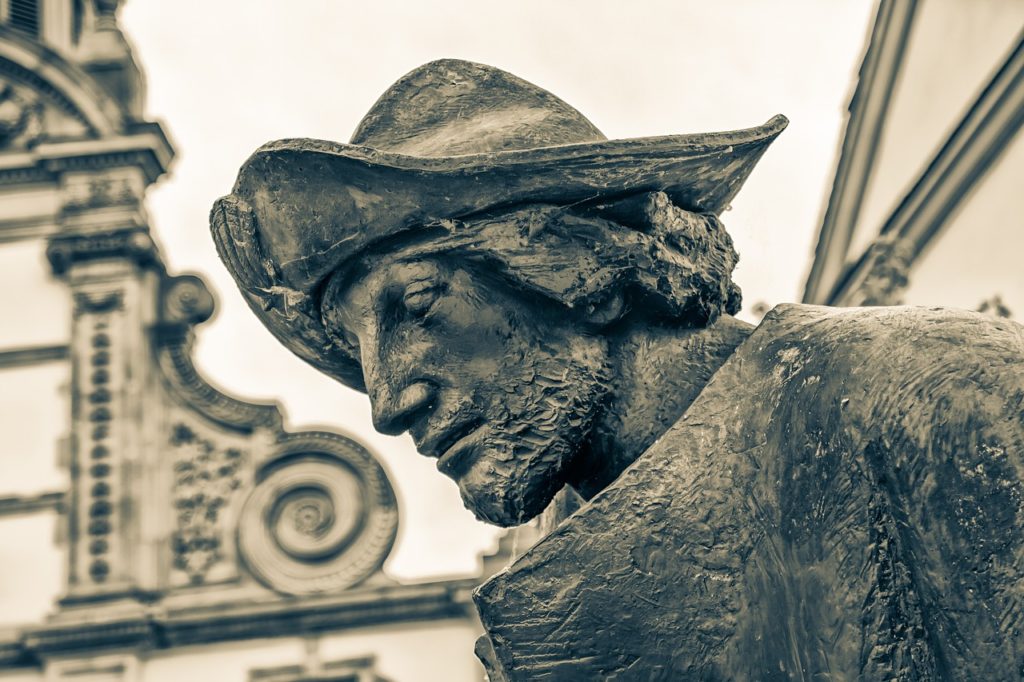 Image of Pilgrim Monument by analogicus from Pixabay

Discussing the history of the Pilgrims who established the first New England colony in 1620 can open up a complex set of questions and arguments. Were they heroic trailblazers or foolish zealots? Were they rescued by the local natives, or did they exploit them? There are no easy answers. The Pilgrims of our first Thanksgiving have been the source of legends and debates for hundreds of years. But, for the purpose of this blog, I am more interested in the word itself.

What is a pilgrim, and What is a Pilgrim?

To begin with, there are pilgrims and then there are Pilgrims. A pilgrim is someone who takes a journey, often for a specific purpose. Many pilgrims are seeking a spiritual connection to the place they are traveling to. The English word pilgrim was first used in the 13th century when the destinations for pilgrims were usually cathedrals and holy sites. They sought venerated relics and a connection to saintly figures. The word pilgrimage comes from the Latin peregrinus, which means outsider or foreigner. Thus, a pilgrim is someone who undertakes a journey apart from normal society.

We capitalize the word, Pilgrim, to specifically mean the Plymouth Plantation settlers of 1620. They traveled to the New World, as it was known, aboard The Mayflower. The ship sailed from Plymouth, England on September 16, destined for the Colony of Virginia but not, as many assume, the area now known as the State of Virginia. Rather, they were headed for the Hudson River in what is now New York. But, rough seas instead brought them to Cape Cod and the tip of land at what we know as Provincetown in present-day Massachusetts.

Here the male members of the pilgrimage composed The Mayflower Compact, a social contract among themselves. It pledged allegiance to the king of England while promising to establish its own government to work for the good of all.

In the name of God, Amen. We whose names are underwritten, the loyal subjects of our dread sovereign Lord, King James by the grace of God, of Great Britain, France, and Ireland King, Defender of the Faith, etc.

Having undertaken, for the glory of God, and advancement of the Christian faith and honor of our King and Country, a voyage to plant the first colony in the northern parts of Virginia, do by these presents solemnly and mutually in the presence of God, and one of another, covenant and combine ourselves together into a civil body politic, for our better ordering and preservation and furtherance of the ends aforesaid: and by virtue hereof to enact, constitute and frame such just and equal laws, ordinances, acts, constitutions and offices, from time to time, as shall be thought most meet and convenient for the general good of the colony: unto which we promise all due submission and obedience. In witness whereof we have hereunder subscribed our names at Cape Cod the 11th of November, in the year of the reign of our sovereign Lord, King James of England, France and Ireland the eighteenth, and of Scotland the fifty-fourth. Ano. Dom. 1620.

Two hundred years later, in 1820, statesman and orator Daniel Webster, who later served as Secretary of State for three US presidents, declared the signers of The Mayflower Compact as our country’s Pilgrim Fathers. The designation, along with the capitalization, has become permanent.

You will also see the word pilgrim often defined as “a wayfarer”. Well, not quite.

Both words are defined as “a traveler on a journey”. But, a wayfarer is always defined as someone who is on foot. Clearly, the Pilgrim Fathers didn’t walk from Plymouth, England to Provincetown on Cape Cod. Also, wayfarer takes its name from the Old English word fær, meaning “journey” or “passage” and there is no sense of the outsider or spiritual in the word’s historical definitions.

Finally, there’s John Wayne. In the 1962 film, The Man Who Shot Liberty Valance, John Wayne called Jimmy Stewart’s character “pilgrim.” And he did it a lot! It’s an insult. In this setting, a pilgrim is an unsuspecting person from the east who comes west, unprepared for the dangers and challenges to come in this new land. Fortunately, Wayne is around to help educate this pilgrim on how to survive. And if that doesn’t sound like the Native Americans and their interaction with our Pilgrim Fathers, I don’t know what does.