Esperanto’s big premiere on the big screen Posted by Chuck Smith on Aug 23, 2011 in Uncategorized 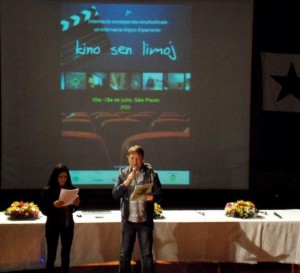 The first Esperanto film festival took place in São Paulo on July 10-13, 2011. This was at the same time as three other large Esperanto congresses: Esperanto Congress of the Americas (TAKE), Brazilian Congress of Esperanto (BKE) and the Brazilian Esperanto Youth Congress (BEJK). Here you can enjoy a joint interview held between Transparent Language, Libera Folio and the director of the festival, Alexander Osintsev (Russia).

How did you come up with the idea of a film festival in Esperanto?

For more than two years, I coordinated and ran Verda Filmejo, which now has the largest collection of Esperanto subtitles. More than forty people from dozens of countries have already contributed. Unfortunately, despite its popularity, the site operates in a gray legal area. What is allowed in one country may not be allowed in another country. So, after some discussion and research, we decided to push our work in a new direction: 100% legal translation and dubbing through a new workgroup, Film without Borders. But that work was also quite difficult as I’ve already written about for Transparent Language.

Most notable is our successes with Marta Masferrer and Sam Green. We helped Masferrer raise funds for her two short films Conlang: the movie and Asternauts. We supported Green’s film The Universal Language by providing him with subtitles in 20 languages! Unfortunately in our other projects, our problems remain the same: non-Esperanto filmmakers and film distributors scoff at Esperanto as a language and a market. Just working with movies under the Creative Commons license cannot complete fix this situation. So, we decided to organize something revolutionary. A real Esperanto film festival would not only show the Esperanto community, but also the general public, that it’s possible to create a completely free (free as in speech) audiovisual culture and prove the effect of the international language as a neutral distributor of national culture. For me, the Esperanto film festival was above all a celebration of art, where both Esperanto and non-Esperanto speakers are welcome.

What did people onsite think of the festival?

After the film festival, we interviewed the audience and also conducted an online survey. Here are some of their opinions:

It’s grand! Hopefully it will become a regular occurrence in other locations, to show that Esperanto can also play a role in cinema. It was also great to spread this side of Esperanto culture. Specifically during this first film festival, it was the best thing that could happen during the congress evenings. It added a modern atmosphere to the often boring evening program in Brazilian events.

I liked it, even though I expected more original Esperanto shorts and feature-length movies.

Cool (despite the moon zombies)! It really saved the congress!!!

How many films participated? In which categories?

21 videos were submitted from 13 countries in three categories: 5-second, 15-second and 30-second. In each of these three categories the international jury chose the best videos using the Schulze method. The members of the jury were Manolo Pancorbo (Spain), Floréal Martorell (France), Anatoly Krasnokutsky (Russia), Chuck Smith (Germany-USA), and Eric Languillat (France-Germany). 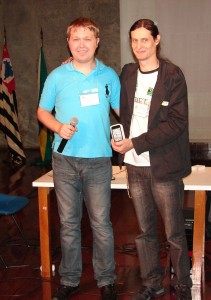 All contestants who finished in 1st place have already received their 4th gen iPod Touch. All of the entries can be viewed at http://kinofestivalo.org/video/

What impressions did you have about the films?

Not only me, but apparently all the viewers really liked the contest pieces, all of which were accompanied by applause. When I received them, I already foresaw the difficulties the jury would have, because every video is unique according to its idea and technical resources. In fact, my judging proposal was discarded by the jury members in favor of a very interesting and scientific method, the Schulze voting method. This method was efficient and will probably be chosen again for future film festival contests.

How were the entries similar? Different?

We imposed no topical or technical limitations for the contest. The only rules strictly enforced were related to the length of the video and its language. Some videos were about Esperanto, and that’s how it was evident they were participating in an Esperanto film festival. Generally, I’d say the festival was a success. We fulfilled our tasks: to find creative Esperanto speakers and to prove that amateur content-makers are capable of producing good work.

Did the film festival only consist of the contest?

The contest was only a small part of the program. 15 films from 7 countries were present in the non-contest part. For three days, we enjoyed the freshest films appearing within the Esperanto community and outside of it. In this part, we saw three films about Esperanto presented through the eyes of people outside our community: “The Universal Language” by Sam Green (USA) and “Esperanto” by Dominique Gautier (France). We also had the opportunity to hear, see and compare what non-Esperanto speakers think of our culture. 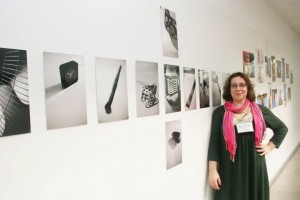 Milene Rinaldi presents her photos for "What is freedom?"

There was also a presentation of short films, like “Conlang: the movie” by Marta Masferrer (USA), “Senmova” [Motionless] by Tugce Madayanti Sen (Turkey), “Que sera, sera” by Geir Greni (Norway), an original animated movie “Ĉapeloj” by Simmon Keith Barney (USA). Rogener Pavinski presented his new documentary “Polaj Spuroj” [Polish Tracks], which formed a program of nation-related documentaries along with “Vojaĝo en Palestino” [Journey in Palestine]. A lot of attention was given to art films with “Attack of the Moon Zombies” by Christopher R. Mihm (USA) dubbed into Esperanto, as well as a collection of shorts by a German director Martin Schreier and a dance film “The Cost of Living” by Lloyd Newson (UK).

Among other activities, you could also view a photography exhibition called “What is freedom?”, coordinated by Rafael Henrique Zerbetto. Two Brazilian photographers (Rafael Zerbetto kaj Milene Rinaldi) and one from Mexico, Joaquin Vega Acosta, presented their works. 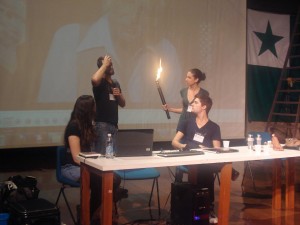 I’m also proud we could organize a special event as part of the festival. For two hours, we enjoyed a live story with the cinema family Cavalheiro, which has a family company “SET Cavalheiro,” during which our special guests told us about their professional experiences as an actor (Olavo Cavalheiro), a specialist in special effects (Hejtor Cavalheiro), and a film expert and multitalented person (Pedro Cavalheiro). Besides entertainment, participants could visit a presentation about Verda Filmejo, a subtitle workshop, a lecture about copyright problems, free culture and an interactive workshop “Esperanto cinema. The most creative art.”

If you could run the event all over again, what would you have done differently?

This year’s film festival was organized in just three months, a really short period for such an event. I had to work 6 hours every day for two months besides my usual work which brings home the bacon. Because of that, I had to neglect many details. The event was in Esperanto for our community, so it was “internal.” I’ll make the next festival more public and more “external.” We’ll invite the press and other film producers. We imagine that the next film festival will likely not be specifically connected to an Esperanto event, but completely independent.

Do you plan to run another one next year?

Organizing such a large non-commercial cultural event demands not only a lot of time and human resources, which are always hard to find, but also a lot of money. Despite the fact that we received a lot of financial support from our partners, the event’s budget was still not completely covered, which puts me in a lot of debt. If I cover it and find a suitable way to finance a future film festival, I’d be more than happy to organize it again next year or maybe in two years. As non-trivial as it may sound, everything now just depends on money.

What advice would you give to participants of the next festival?

If you would like to participate in the contest, you should first have the courage to express your idea in the international language. Most of us don’t even know that what’s impossible in your national language, could be possible in Esperanto. If you’d just like to watch movies, then be prepared for surprises.

I’d like to add that it’s difficult to imagine the film festival happening without the help of our partners. We would like to thank TEJO and E@I for their support related to the contest. Also, to the German foundation FAME and private persons, among which are Jader Rodrigues da Silva (Brazil), for his support of the non-contest program. The entire time, Varsovia Vento and the magazine Kontakto supported us by informing the community about the event. A special thanks goes out to James Rezende Piton, Jose Roberto Tenorio, Rogener Pavinski, Rafael Henrique Zerbetto, Cândido Ruiz, Fábio Silva, Luana Araujo and the many members of BEJO.