At the Urba Semajnfino, I met Nick Woods, who runs the Esperanto club at William & Mary (Williamsburg, VA, USA). Then I encouraged him to visit the Youth Esperanto Week (JES) in Gdansk, Poland and he took me up on the offer! But enough from me, learn more about the adventure from Nick himself! 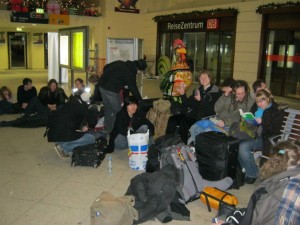 I’ve wanted to travel abroad using Esperanto for quite some time now, but there’s always been some obstacle, whether it’s the cost of an overseas flight or other plans getting in the way. So, when I found out I could go to the Junulara E-Semajno in Gdansk (Poland), I jumped on the chance. Instead of flying straight to Gdansk, I decided to fly first to Berlin, partly because it was much cheaper and partly because I wanted to take part in the train caravan heading to Gdansk. I ended up traveling with twenty to thirty other Esperantists, mostly from Germany. The atmosphere was festive, with some of the more musically inclined members taking out guitars and strumming some well-known Esperanto songs, and it was an awesome way to practice my Esperanto before arriving at JES. Eventually, though, the jetlag and the midnight departure time took their toll, and I fell asleep.

Upon arriving at the event, I made it a goal to talk to as many different people as possible. Fortunately, many people there, being Esperanto speakers, were very interested in how people live all over the world, so I was able to talk about food, school, music, politics, and other sorts of culture in the US, and in turn I heard about culture from Europe and other parts of the world. I also occasionally help put together the daily news for Muzaiko, so I helped the group sell T-shirts and CDs as a fundraiser. It surprised me to learn that my Esperanto was good enough to help an organization make money! 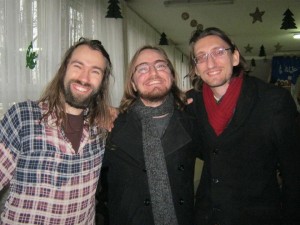 For me, the best thing about the event was the live music. There were excellent performances from bands like Inicialoj DC and La Perdita Generacio, whose music I’ve been listening to and enjoying for years, as well as groups I’m less familiar with, such as the family folk band Asorti and the surf rock group Danĝera. Additionally, the pianist and singer-songwriter Gijom gave a memorable impromptu performance in the hallway in front of the cafeteria. Two of the members of La Perdita Generacio talked to me at length about what it’s like to be an Esperanto speaker in the US, and how much North America needs more Esperanto musicians! There was also quite a selection of Esperanto-language karaoke and a dance floor that was open all night long.

There was always something interesting going on during the event. Some of the lectures were very engaging, such as the very ad hoc lesson about the Polish language or the discussion group about lifehacking. Listeners were invited to the recording of one of the episodes of my favorite Esperanto podcast, Varsovia Vento (you can hear me during part B of the 77th episode). I got to get out and see a good part of the beautiful old part of the city during the Urba Ludo, which was a sort of scavenger hunt. I had some generally decent vegetarian food during mealtime, and Polish beer and some interesting junk food (I’m still not quite sure what it was made out of) were available for purchase.

During the culminating New Year’s party, I definitely felt that being with Esperantists was the best way to bring in 2012. And I strongly urge anyone to learn Esperanto and travel outside their home country, since learning and using this language really is an experience unlike any other.

Nick Woods is now planning to organize the next Urba Semajnfino to be held in Richmond, VA later this year.