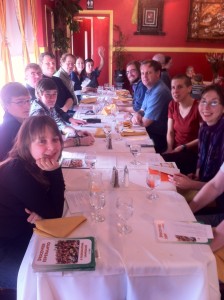 In Passage to India

Last weekend, 16 people from 3 countries came out to Harrisburg, PA to speak Esperanto together, including the Internet-famous musician, Manekeno. 8 came from Pennsylvania, 2 each from Germany, New Jersey and Virginia with 1 each coming from Mexico and Maryland. I also found it interesting that exactly half of the participants were vegetarians.

In organizing this event, I really wanted to create a “model weekend,” which North American Esperanto speakers can use to organize their own weekend meetings all across the continent. Basically, I think Americans have different needs than Europeans. American Esperanto speakers are more spread out and have less vacation days than their European counterparts, so that shorter, regional meet-ups make more sense than week-long national or international ones. This would also help participants from feeling lost in the crowd, and it would enable them to find Esperanto speakers living nearby, which they would rarely meet at a national conference.

We started our event at Passage to India (a great Indian restaurant), where I surprised everyone with a drawing for random Esperanto goodies. Everyone cheered when I presented the documentary The Universal Language. After that, we headed to Hershey’s Chocolate World.

After that we spontaneously perused the books at Midtown Scholar Bookstore and then went back to the hotel to have some German bread and hang out. A couple of us went out and got a nice variety pack of beer from Appalachian Brewing Company, which was particularly amusing since we bought at 400 Cameron St and it was brewed at 50 Cameron St. Talk about local beer! 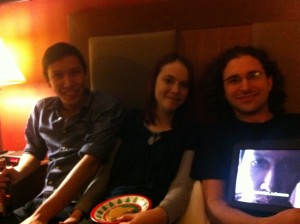 Watching Pac-Man with Manekeno and Hector

Back in the room, a party erupted and despite the various language levels, everyone seemed to fit in. We watched some amusing Esperanto videos online and fluent speakers helped interpret for beginners. It was especially fun to watch Manekeno’s music videos while she was in the room! We also had some fun with Esperanto karaoke.

The next morning started out a bit slow, but then we all joined in a game of Word Race in Esperanto (more or less a Taboo clone for iPhone, i. e. a word-guessing game). Then we walked around Reservoir Park and went to the National Civil War Museum. My goal was to balance educational and entertainment venues for this event. I joked afterwards that next time I’d try to take the group to a peace museum! 🙂

Next, we had Thai food and crossed the Susquehanna River to sit in a gazebo on City Island and play more Word Race. Some even said that playing that game together was the highlight of the weekend for them! At around 7pm, everyone headed home.

For me, it was quite an experience organizing such an event from abroad in my home in Berlin. Here is what I would change next time:

– Make it cheaper for students. As it was, I had the impression that the $40 for a night of lodging was a bit too expensive for the students and too cheap for the adults. Next time, I plan to make it $30 for students and $50 for others. I also noticed this neglect on my part when I organized the cinema evening in Berlin. 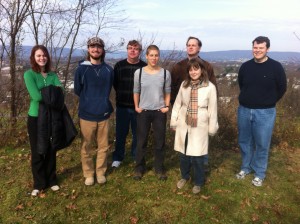 – Take the group pic at the beginning. Between lunch and checking in to the hotel, two part-time participants had already gone home. I forgot to tell them about the group picture.

– Call potential participants earlier. I used the address book of Esperanto-USA to contact everyone who lived less than 200 miles from the meeting, but at first they were too busy and later I was, so that many people didn’t get much notice of the event. Still, thank you Esperanto-USA for the support!

– Send a press release before the event. I was increasingly busy preparing for the trip and all, so I asked for help on the AktivUsono mailing list. Unfortunately, nobody replied. I later wrote to the eusa-membroj mailing list and got lots of help, but by then it was too late for me to actually write the announcement, so that ended up falling through the cracks.

– Have separate webpages for information about the meeting and registration. Google Forms is a great solution to easily set up a registration form. I also used Google Forms to collect feedback after the event. The disadvantage is that it doesn’t let you have links on it, so I should have made a separate webpage for info about the event. Also, I should have asked everyone if they would be willing to let me list their participation on the website and to send out their contact details to participants after the event, so that participants can stay in touch more easily.

– It would be better to have the educational event on Saturday and entertainment on Sunday. Participants have more energy on the first day, so it would make sense to have the educational visit then and save the entertainment for the second day, when people are feeling more tired. Also, I should have looked more carefully at Sunday opening hours, as that messed up my plans for both the museum and the Thai restaurant.

Having said all that, I’m still quite content with how everything went and I actually think I’m being a bit overcritical about my organization of the event. Considering how I laid into the IJK this year, it’s probably only fair though.

If you missed this event, you need not despair. Jeremy Aldrich from Harrisonburg, VA is considering working with David Doughtery from Rockville, MD to organize the next Eo weekend in VA. I hope that works out!

Would you like to organize an Esperanto weekend in your city? It’s easier than you think, and a lot of fun! If you’re interested in organizing your own weekend Esperanto event, please don’t hesitate to contact me… I will gladly share my experience!