Universal Language in Berlin cinema Posted by Chuck Smith on Nov 11, 2011 in Uncategorized 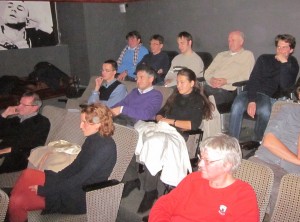 Two days ago, I had the pleasure of showing the documentary The Universal Language in Berlin. Amusingly enough, a few months ago, I saw a deal to rent a movie theater room for €49 (US$66) and thought that would be cool. I plan to use more coupons there for two screenings of Going Cardboard, once with Esperanto subtitles and again with German subtitles. In any case, 20 people showed up last night to watch The Universal Language in English with German subtitles.

After a short introduction, I presented the music video Berlino sen vi by Initials DC, which I had previously set up as a subtitle challenge to our community. That campaign has so far succeeded in making that film available in 30 languages. My plan with this campaign now is to write someone everyday who speaks a language not yet translated until I have 50 languages. 🙂 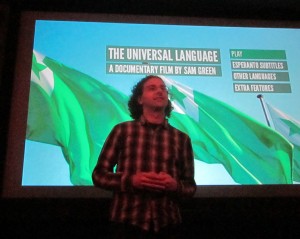 After this, I presented a bit about how the film came to be. It started when Sam Green was making a live documentary called Utopia in Four Movements. One of the movements is Esperanto and he found so much information about Esperanto that he wanted to make a short film dedicated entirely to that. Thus, The Universal Language was born.

Unfortunately, as soon as I started the movie and took me seat, I realized that in my excitement, I forgot to pass on a special message:

I’m thrilled about this upcoming screening – it’s the German premier of my new film, The Universal Language. I’m happy that the the Berlin-Brandenburg Esperanto Association has been inspired to put this event together. I’m not an Esperanto speaker, but I greatly admire the Esperanto movement and am honored and thrilled to have this association. For more than 100 years, Esperanto speakers have been trying to make the world a better place, and I have tremendous respect their hopefulness, pragmatism, patience, and fondness for people.
–Sam Green, director of The Universal Language 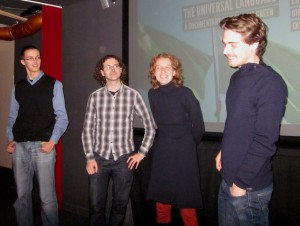 After the film, Luisa Rund and Daniel Salomon came up on stage to answer questions with me. Luisa talked about how fun it was to be filmed by Sam Green in the Yokohama World Congress of Esperanto, and Daniel spoke more about how he helped Sam Green scavenge the archives of the Universal Esperanto Association for interesting materials.

When the discussion was over, I showed the DVD extras and then we all went upstairs for drinks. All in all, I’d say the event was quite a success, but I did learn of a few ways we could make such an event better next time. First of all, the event wasn’t in the filmcafe’s program, because I didn’t think to ask them to do that. Secondly, we sent out the press release only a week in advance. We had even planned the event six weeks in advance to give us time to prepare and send out the message, but our head of PR and me were both too busy at different times in order to coordinate this well. In any case, it was a great evening and I look forward to similar events in the future!

Sam Green’s website offers the Universal Language DVD for sale. Also, you can buy the Berlino sen vi music video from Vinilkosmo, which sync with subtitles downloaded from universalsubtitles.

All photos courtesy of Roland Schnell.