Ah, the beginning of November is upon us … the season of spectacular foliage, chilling temperatures, and … particularly divisive elections. 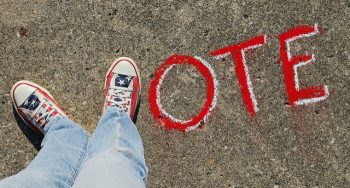 Courtesy of Theresa Thompson on Flickr.com (via Dronethusiast.com)

As tomorrow, Tuesday, November 8, is the day Americans go to the polls to choose their next president, let’s go over some French election terms (no pun intended!).

Le président de la République française is elected for five-year terms (called un quinquennat). Before the year 2000, French presidents were actually elected for seven-year terms (un septennat). Just as in the United States, presidents can only serve two consecutive terms (deux mandats consécutifs). The last élections présidentielles were held in April and May 2012, when current president François Hollande was elected. That means that the next elections will be held in April and May 2017. Because this is Hollande’s first term as president (or, you could say, the incumbent president–le président sortant ou le président en excercise), he is eligible to run for a second term. This election will most likely be pretty divisive in France, as the American presidential election has been, due to recent political divides and the raised terror threat.

Unlike in the United States, the French president is directly elected through French citizens’ votes (and not through something like the Electoral College). (Although the French president was elected by the equivalent of the electoral college–le collège électoral–until a referendum in 1962 called for direct voting.) There are typically two rounds of voting (deux tours) in the presidential election; to run in the first round a potential candidate (un candidat) must have 500 signatures from officials (called sponsorships, or les parrainages) who can only officially support one candidate. There are often many candidates for whom people can vote during the first round. If one candidate does not receive a majority of all the votes, then it goes off into the run-off round (le deuxième tour).  The elected president must be inaugurated into office in a solemn ceremony called la passation des pouvoirs (the handing over of powers).

Here are some more French vocabulary terms for this election season: