I went down a little bit of a rabbit hole this week after I realized that the French word embrasser – which I’ve always known to mean kiss – literally means to take in one’s arms (see the word bras/arm right there in the word!). And when you dig in a bit, there’s a lot more to hugs & kisses from France than I knew! 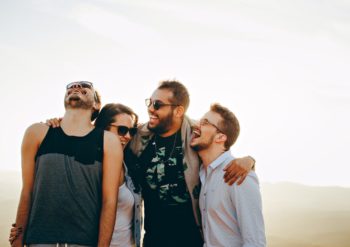 I come from a family of huggers so it was a shock to land in France the first time and find that hugging isn’t really a thing. Even though they’ve adjusted, it’s still fun all these years later to watch the collision of huggers and kissers when my American family and my French family meet up!

As Josh shared with us previously, the typical French greeting involves la bise. They are so ‘hug averse’ that they don’t even really have a word in French for hug. Words like étreinte are too formal and calin leans more towards a snuggle or a cuddle. Though it turns out they do have a word for it … and it is (or at least it used to be!) embrasser.

While in today’s vernacular  embrasser  has come to mean to kiss, it’s original meaning was the same as the English embrace: to take in one’s arms but as the word baiser shifted over time, the French found themselves in need of a new word to mean kiss. You see, at the time the word for to kiss was baiser (which gives us another term for a kiss, un baiser) but today that word has evolved to mean something much more carnal than a simple meeting of les lèvres1the lips (While you will hear the word used in many different setting, best to avoid it as a French learner lest you give someone the wrong idea!)

If, like some of the people in this video, you struggle to remember which way to change the clocks, you can always count on this little ‘rhyme’ which my Aunt Rose shared with me: En octobre on recule. En avril on avance. (In October “fall back”. In April, “spring ahead”.)3… though it isn’t quite the same now that we change the clocks in November (novembre) and March (mars).

I love the fall, but it’s been gray and rainy for the past week. Searching for a little good news, I came across this song from Flavia Coelho, a Brazilian singer living and performing in France. I hope this bonne nouvelle will lift your spirits as it did mine.