Every day is a learning experience here in France. Something as simple as closing the blinds or going to the store can catch you off guard. Even saying un café, s’il vous plaît can be confusing when you see what you ordered! 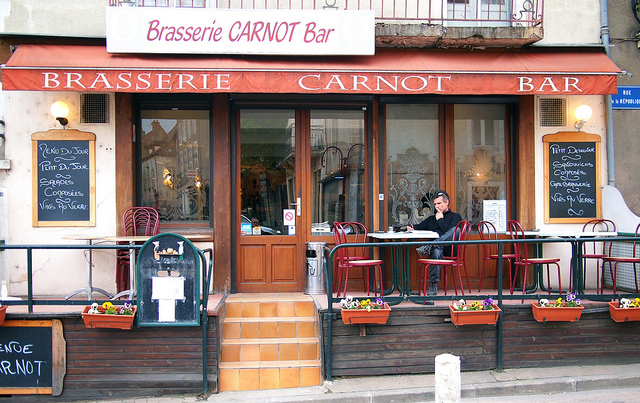 Something that confused me is what les Français (French people) mean when they say un café, as in a place to buy a cup of joe and not le café (coffee) itself. Ordering coffee in un café is nothing unusual, even if the vocabulary is different, but it may be suprising to see that you can have a pint as well!

I was surprised the first time un ami (a friend) called me and said:

I agreed to meet him, but had to think about what he said.

I thought I maybe heard the wrong word, but when I got to le café, mon ami was waiting for me, and he already had une bière. I asked mon ami if there is a difference between un bar and un café and he was somewhat surprised by my question.

For a lot of French people, there isn’t much of a difference! Un bar will generally be open later, and be more focused on alcohol than coffee or food, but in many situations un café is pretty much the same as un bar.

De plus (what’s more), there’s buying stamps at un tabac, another place where you can order un café or une bière! In France, les cafés, les bars et les tabacs sometimes overlap. It can be hard to tell them apart at first, but they make French culture all the more interesting!

Whatever you order you can profiter du soleil (enjoy the sun) during these warm summer months!