World War I ended over 100 years ago. This year’s celebrations of the 103rd anniversary of the Armistice included a special tribute to a hero from a later conflict, World War II. 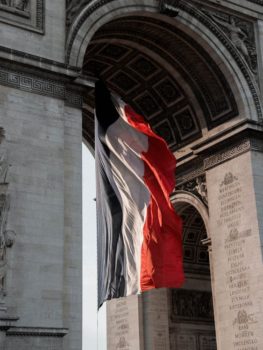 Photo [CC0] from Nicolas at Pexels.com

Hubert Germain, who passed away earlier in October, was the last living member of the ordre de la Libération created in 1940 by General de Gaulle to honor those who worked towards the liberation of France during WWII.

Germain may have been the last to die, but he was one of the first to join General de Gaulle in London and to become part of the Forces françaises libres1Free French Forces. For the celebration “qui avait été entièrement imaginée par Hubert Germain lui-même avant sa mort”2that has been planned by Germain himself before his death, the cercueil3coffin was carried par char4on a tank to the Arch de Triomphe, sight of the tomb of the unknown soldier, for a speech by President Emmanuel Macron.

Following the ceremony at the Arch de Triomphe, Germain’s remains were transported to Mont Valérien where they will be interred alongside the remains of 16 soldiers and resistance fighters from WWII at the Mémorial de la France combattante5Memorial to Battling France. Even though it’s just a few miles from the heart of Paris (and can be seen on the skyline of the city), I never knew about this location.

Mont Valérien’s fortress was the sight of over 1000 executions of resistance fighters during WWII and in addition to the Memorial de la France combattante, the hill is also home to le cimetière américain de Suresnes6The American Cemetery of Suresnes, final resting place of over 1500 American soldiers who died in WWI, along with 24 unidentified soldiers from WWII.

Check back next week for an update on the windows at the Galeries Lafayette which are due to be unveiled le mardi 17.

Weather word of the week

I learned a new word this week when my iPhone informed me that we were going to have de la bruine. It wasn’t a word I’d encountered before, but it was certainly a weather pattern I was familiar with. Cold, damp days when the air just feels wet are common in the fall and the drizzle that often comes with grey days is what my phone was warning me to prepare for!