The latest news from France Posted by Tim Hildreth on Mar 22, 2022 in Environment, History, News

The news in France continues to be dominated by la guerre en Ukraine1the war in Ukraine and l’élection présidentielle2the presidential election but, if one looks, there are other interesting événements  insolites3interesting/surprising/unusual occurrences happening. 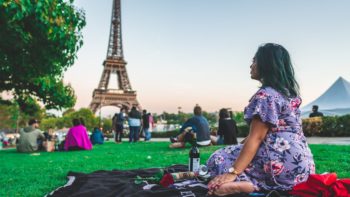 Just over a year ago, I talked about how the Eiffel Tower was getting a make-over/new paint job ahead of the 2024 Olympic Games. Now the iconic monument has had another update.

This latest addition to the tower – lifted to the top by helicopter … a first for the tower – will expand the digital radio coverage in Île-de-France.

And as M. Jean-François Martins reminds us in the video, this is completely in line with the history of the Tower whose very existence was saved in the early 1900 by the development of radio!

A sandstorm in France?

As the video below explains, last week also saw some strange “weather” in parts of France. A strong wind from North Africa carried sand and dust north from the Sahara desert to much of Spain and parts of the south, west, and even Parisian region of France.

The dust cloud dirtied cars, made for some difficult air quality situations, and as you can see here, to some spectacular5The word dingue in the post headline means crazy, insane, or nuts coucher de soleil6sun sets.

Is it too early to enjoy Covid-inspired media? I wasn’t sure I was ready for it until I came across this charming movie on Netflix.

8, rue de l’Humanité (8 Humanity Street, or “Stuck Together” as it is known in English) follows the residents of one apartment building in Paris as they cope with being confinés ensemble7confined together in their immeuble8building during the early days of Covid.

As is all too often the case these days, les voisins9the neighbors ne se connaissent pas10don’t know each other but are forced to confront their differences – and what they have in common – as they cope.

And finally … an update

The news of the world can be overwhelming these days. It’s important to remember that part of why we learn other languages is so that we can connect with those who are different from us. I came across a new video today for one of the songs from one of my favorite French artists, Calogero, today, and I thought it was a good time to revisit this post from back in 2018.

We only have one home, and while we come from many different cultures, countries, languages, and beliefs, we’re all just one human race.