A Brief History Of The German Flag Posted by Constanze on May 8, 2017 in Culture, History, Language

The German flag, with its black, red and gold stripes, is one of the most easily recognisable flags in the world. In this post, I’ll give you some information about the origins of the current flag, and show you some of its variations throughout history.

Known in German as the Heiliges Römisches Reich, this pre-Germany state used a banner (not an official flag) featuring a black eagle with a red beak and red claws, on a yellow background. Its colours influenced the German flag as we know it today. 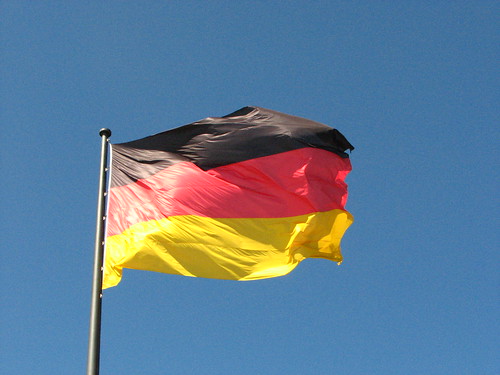 Photo by fdecomite on flickr.com under a CC license (CC BY 2.0)

The German flag as we know it today first came about in 1919 during the Weimar Republic, after Germany’s defeat in World War I. The black, red and gold colours used by the Holy Roman Empire are back, intended to symbolise a united, democratic Germany. The colours themselves (Schwarz-Rot-Gold) were mocked by far-right groups for the gold’s slightly ‘off’ colour. They called the flag ‘Schwarz-Rot-Senf’ (‘Black-Red-Mustard’) or ‘Schwarz-Rot-Scheiße’ (‘Black-Red-Shit’).

By Fornax (Own work) [Public domain], via Wikimedia Commons

When the Nazi (National Sozialist) Party seized power in 1933, they made their Party flag the national flag of Germany. This featured a red background, a white circle, and a black Swastika (Hakenkreuz) in the middle. The red colour symbolised the socialist, the white symbolised the nationalist, and the Hakenkreuz the victory of the Aryan peoples.

Following World War 2, Germany’s national flag went back to the tricolour Bundesflagge. When the country officially divided in 1949, East Germany (Deutsche Demokratische Republik or DDR) and West Germany (Bundesrepublik Deutschland or BRD) used the same flag, but a coat of arms was added to the East German flag in 1959. This was seen by West Germany as a deliberate attempt to further divide the two nations, and as such they nicknamed the East German flag die Spalterflagge – ‘the divider flag’. When the country officially re-united in 1990, the flag went back to the original, tricolour flag.

As well as the national flag, each German state has its own flag, which you’ll see when you visit these states. Here are a couple of them: 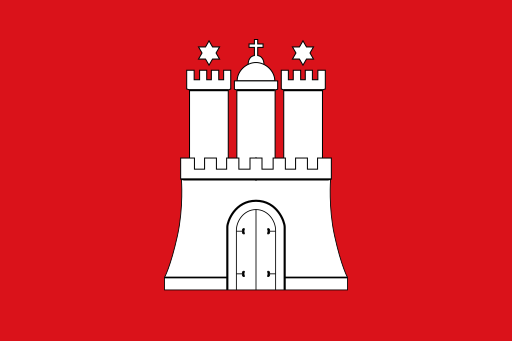 So there you have a brief history of the German flag. Of course, there are more variants and flags than those listed here, but this post would’ve gone on forever had I listed them all! I think you’ll agree that it’s amazing how much you can learn about a country from its flag alone!

For more language learning advice, free resources, and information about how we can help you reach your language goals, select the most relevant newsletter(s) for you and sign up below.