Denglish Pseudo-Anglicisms Posted by Constanze on Mar 23, 2015 in Language 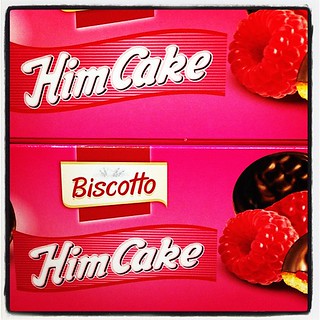 HimCake. HerCake? #denglish. Him is short for Himbeer (raspberry). Photo by fiverlocker on flickr.com under CC BY-SA 2.0

Last time I posted about the ever-growing use of Denglish (or Denglisch, depending on whether you’re speaking German or English) on social media & websites. Since that post, by the way, I’ve been keeping an eye out for more Denglish on social media. Here’s an interesting one I saw recently: Danke für’s featuren! – Thanks for the feature/for featuring me! Agh!

Thanks for the comment, Angie! There seem to be many different types of Denglish, some focusing on grammar and some on language. One type of Denglish is known as a pseudo-anglicism: a fake English word. That is, an English word with a different meaning in German, or a word that looks English but has no meaning in English – but it does in German. Confused? Here are some examples:

Handy – mobile phone. This is probably the most famous example of Denglish in use! The only thing is that in English, the word handy is an adjective meaning practical or useful. So why Handy? I guess a Handy is quite handy. It could also be because you hold a mobile phone in your Hand. 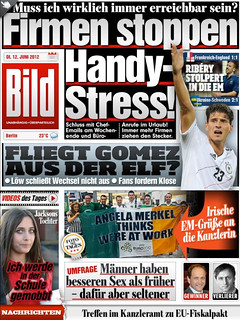 Photo by dullhunk on flickr.com under CC BY 2.0

Wellness – Light exercise or relaxing activity designed to improve health and/or reduce stress. As you can tell, this is quite difficult to translate. English also uses the word wellness, and in English it refers to the state of being well. It’s rarely used in English. But in German it’s taken on a whole new meaning, with Wellnesscenters (‘wellness centres’) and Wellnessprogrammen (‘wellness programmes’) everywhere you look. Basically, if you see the word Wellness somewhere, you’re looking at a type of mini-spa.

Bodybag – messenger bag. The English version could also be  ‘cross-body bag’, which might explain the name. This is an unfortunate translation, because a body bag in English refers to the bag you carry a corpse in…

Smoking – smoking jacket. For some reason German uses one word, Smoking, to describe this type of jacket – even though the English word smoking (not capitalised) describes puffing on cigarettes.

Showmaster or Talkmaster– TV show host/talk show host. Showmaster in English sounds like a very old-fashioned word for a compère at a 1920s cabaret bar. Talkmaster means nothing in English.

Streetworker – social worker. More specifically, it means a social worker who works in underprivileged neighbourhoods. This is another unfortunate translation, because it is very similar to the English streetwalker, which is another word for a prostitute.

Training – working out. In English, saying you’re training implies you’ve got a race coming up, or that you’re engaged in some sort of competitive sport – eg. ‘I’m training for my boxing match’. In German, Training simply refers to any kind of workout. If you go to the gym, you’re doing Training.

Cutter – Film editor. Yeah, some Germans’ are lucky enough to call themselves professional Cutters. This word obviously comes from the process of ‘cutting’ bits of film as you edit it. Unfortunately, in English Cutter sounds like the title of a gory horror movie. It might also be confused for pizza cutters and cookie cutters.

German pseudo-anglicisms can be confusing for German learners, so it’s best to familiarise yourself with them so you know what you’re dealing with. 🙂

What is your favourite German pseudo-anglicism? Are there any which really confuse you?