The Christkind (sometimes known affectionately as Christkindl) is a traditional giver of gifts at Christmas time, mainly in European countries including Germany, Austria, Czech Republic, Liechtenstein, Hungary, Slovakia and Switzerland. The word Christkind translates to ‘Christ Child’. The Christkind is depicted as an angelic figure with blond hair and wings. Vintage Christmas postcards like these ones capture the magical feeling of the Christkind perfectly: 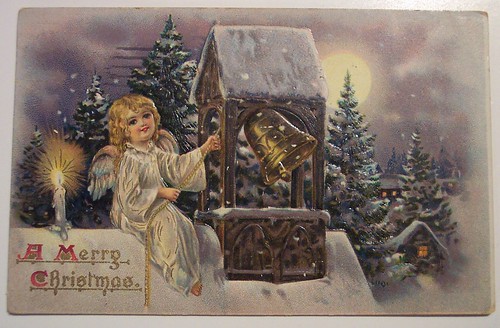 Photo by vintagehalloweencollector on flickr.com under CC BY-ND 2.0

What does the Christkind do?

This is all very, very exciting if you are a child! The Christkind brings children their Geschenke (presents) on December 24th and leaves them underneath the Weihnachtsbaum (Christmas tree). Parents tell their children that the Christkind won’t come if they try to spot him. He is not meant to be seen! Sometimes parents will secretly ring a bell to announce the arrival or departure of the Christkind, after which the children go running to find their presents. 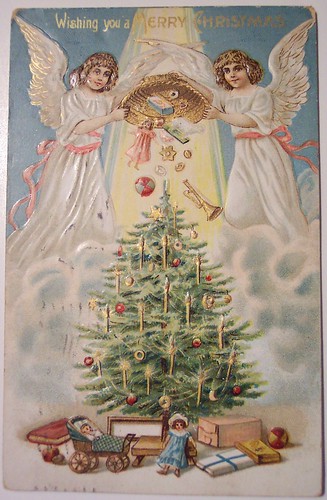 Photo by vintagehalloweencollector on flickr.com under CC BY-ND 2.0

I remember my parents doing this when I was very young: On Christmas eve one year, our doorbell rang, and I went running to open it in hope of seeing the Christkind, but when I opened it, all I found were a collection of presents on the doormat! Because my parents were in the living room at the time, I was convinced it was the Christkind who had brought us the presents. To this day, I have no idea how they did that (nor do I want to spoil that memory by finding out!). But the fact that I still remember it proves how magical a thing the Christkind can be for children.

But why does Christkind exist if we already have Santa Claus?!

In short: Santa Claus originated as a Catholic figure. The Christkind was created by Protestants.

The Christkind was created during the reformation, in 16th and 17th century Europe, when Martin Luther wanted to de-emphasise the previous Catholic celebration of Saint Nicholas on December 6th, and invent a new celebration for the Protestants. This was because he did not want a Catholic saint (St. Nicholas – who we know today as Santa Claus) bringing Protestant children their gifts. He also considered it blasphemous to idolise saints rather than Jesus himself. Hence, the Christkind was born – and brought gifts on December 24th, the last day of Advent.

As Europe became more secular, the Protestant Christkind and Catholic St. Nicholas began to cross over. St. Nicholas became a secularised version of himself, now known in German as der Weihnachtsmann (Father Christmas/Santa Claus, lit: “The Christmas man”), celebrated regardless of religion. Meanwhile, the Christkind transformed from a suggestion of Baby Jesus into a blonde, female angel. In Nürnberg, each year a teenage girl is chosen to represent the Christkind in the weeks leading up to Christmas. She is known as the Nürnberger Christkind and, much like with Santa, children take pictures with her and tell her what gifts they would like for Christmas. This has been a tradition since 1969. 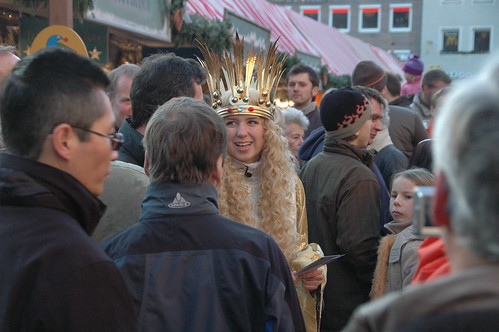 The Nuernberger Christkind. Photo by marcusmeissner on flickr.com under CC BY 2.0

Christkind in battle with Santa Claus
Although it has been commercialised over time, the traditional Christkind is still important to many families in Germany, Austria, and other parts of Europe, and there is much less commercialisation of it than there is of Santa Claus. Since the 1990s, the Christkind been fighting with the commercial celebration of Santa, but it remains a much-loved part of European Christmas time. I will leave you with an article I found from 2009 about Austrians campaigning to save the Christkind tradition from Santa Claus!

BBC News: Austria Campaign to Save Christkind from Santa Claus

I hope you enjoyed this Christmassy post! Are you feeling the Weihnachtsfreude (Christmas joy) yet, or is it still too early for you?