German Car-Related Words Posted by Constanze on Apr 18, 2018 in Language

Guten Tag! Germany is world-famous for its cars, so it’s no wonder that there are several, quirky German words and phrases related to vehicles and driving in general. Today I’d like to introduce you to a few of these words and phrases! 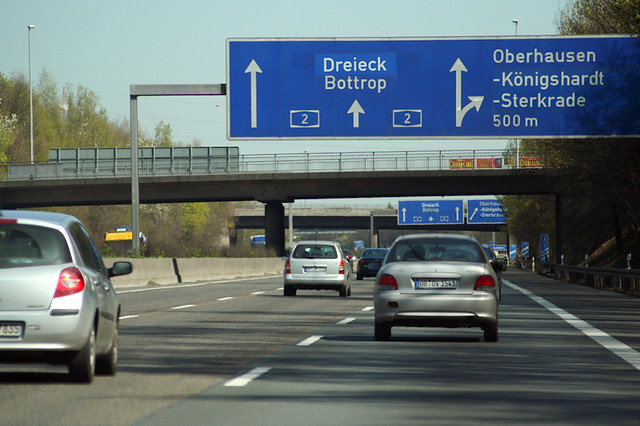 Foto by johnas on flickr.com under a CC license (CC by 2.0)

The first word is das Elefantenrennen. This literally translates to ‘elephant running’ and describes the situation when a big lorry tries to overtake another big lorry on the motorway, thus blocking both lanes so faster vehicles can’t overtake, and ultimately slowing down traffic. Do you know the feeling? The Germans find this so annoying that now, any Elefantenrennen that takes longer than 45 seconds is actually prohibited, and can land the overtaking driver a ticket!

The second driving-related German word is die Familienkutsche. A Kutsche is traditionally a carriage, such as one that would have been pulled by horses in the past. But a Familienkutsche isn’t some old-school method of transport – it’s the word used to describe those big, family cars or people carriers used by parents with several children.

Here is a phrase you can use. In English, if someone is a bit mad we say they ‘have a screw loose’. The German equivalent to this phrase is ein Rad abhaben – ‘to have a wheel loose’! As abhaben in a separable verb, you would form it in the present tense like so:

There are two more words I wrote about previously, which are: der Schilderwald (a ‘forest of road signs’) and das Reißverschlusssystem (a ‘zip system’). You can read all about these words here!

Germany has always been associated with its cars. These words and phrases show you how colourfully Germans describe certain driving-related situations, and how driving-related words are used in everyday life, too. I hope you’ve found it interesting.