Tomorrow is a big day in the German-speaking world. On May 1, it is time to put up a Maibaum (May tree, or maypoles). But what is a Maibaum, and why are they aufgestellt (put up)? And what will this tradition look like with the Coronavirus going around?

What is a Maibaum?

A Maibaum. This specific one is from the Czech Republic, but it is very similar to the German ones (Image by by Jan Kopřiva at Unsplash.com).

The Maibaum is a pole or a Baumstamm (tree trunk) that is decorated with wreaths and ribbons. The trunk is completely entastet (debranched) and often peeled. If it is painted, it is either pale white or a spiral of white and blue. This so-called richtig geschnürter (properly strung) tree is a tradition of Bavarian origin. And a look at the Wappen (crest) of Bavaria immediately explains that color combination!

The trees can get pretty tall. In northern Germany, they usually reach about 20-25 meters (66-82 feet). In Bavaria, there are some fixed Maibäume, where only the Kranz (garland) is changed year after year, which get up to 56 meters (184 feet)!!

The Maibaum is usually aufgestellt on May 1st, in some places even tonight, already! In some other regions, it is only placed on Pfingsten (Pentecoste). The tradition goes beyond the German-speaking world. It appears in the Czech Republic and Scandinavia, too, for example.

The Austellen (placement) is normally preceded by a Prozession (procession), in which the Maibaum is carried through the town. That somehow reminds me of the Swiss tradition of the Bloch – minus the smoking kids. The Prozession often ends at the Dorfplatz (town square) or another central place, where it is then aufgestellt in the evening.

The tree then stays there until the end of the month or all the way until Herbst (autumn)! 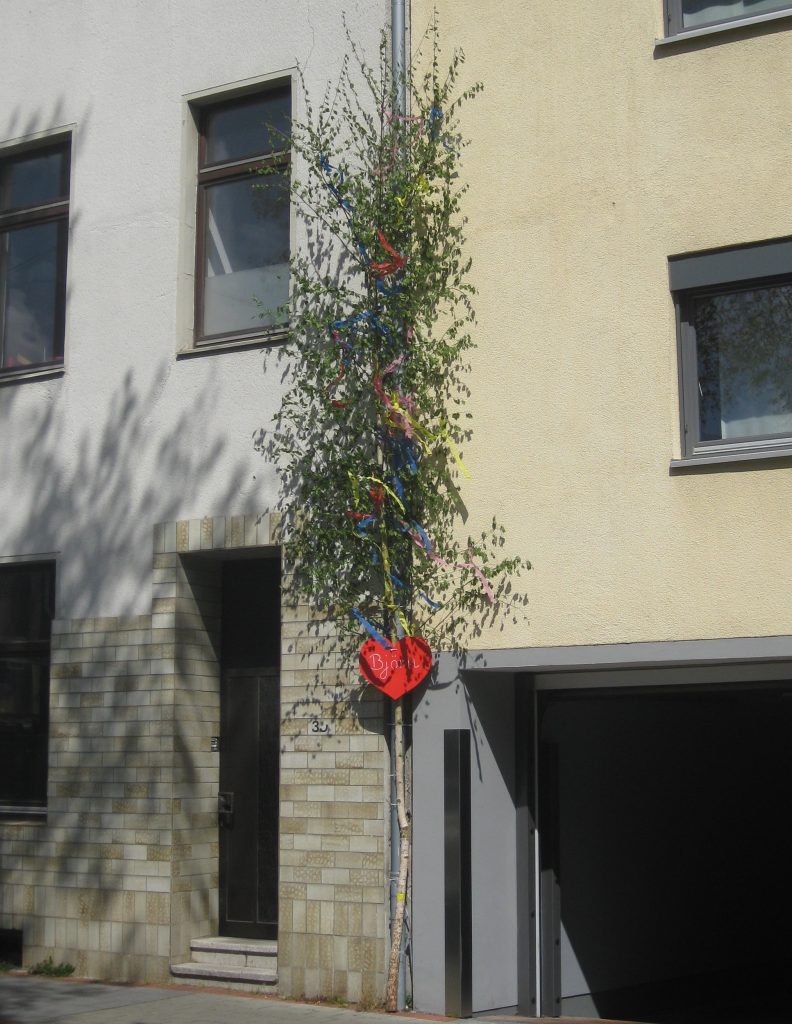 A Liebesmaie for Björn. In the Schaltjahren (leap years), the roles are reversed, and the women give the men a Liebesmaie (Image by Sir James at Commons.wikimedia.org under license CC BY 4.0)

Besides the large trees, there are also the Liebesmaien (love Maypoles). These smaller trees are set up by the unmarried men in front of the houses of unmarried women in town. In some places, this only happens for the girlfriend or Angebetete (beloved).

After a month, the tree is picked up. The person that put up the Liebesmaie is then thanked with a dinner invitation or a Kasten Bier (crate of beer).

But why do we do this whole Maibaum-thing?

The exact origin of this tradition is not really clear. Most likely, it is a mixture of Germanic and Christian traditions, like the Weihnachtsbaum (Christmas tree). It is believed that originally, Germanic tribes would place a Maibaum to honor their Gods. How exactly the Christian use was integrated also does not seem very clear, but that this happened is clear in how some regions only put up the Maibaum around Pfingsten. Sometimes, the Maibaum is even referred to as a Pfingstbaum (Pentecoste tree). So that clearly shows Christian involvement.

Besides that, May simply is a month that is seen as the start of the warm time of the year. This is also celebrated with tonight’s Walpurgisnacht (Walpurgis Night), which is these days also known as the Tanz in den Mai (Dance into May).

In Bayern (Bavaria), the Maibaum is accompanied by many more interesting traditions. One of the more eccentric ones is the Maibaumklau (Maypole theft). See the video above.

The Maibaum is felled and prepared months in advance of its actual placement. In the meantime, the Maibäume are simply lying around, drying out properly. That is a great time to steal it!

According to tradition, people from a neighboring town can steal a Maibaum and are allowed to keep it if they make it out of the town’s borders. Of course, because of this, Maibäume are often überwacht (watched over), but there are always opportunity to get past the guards! If the Diebe (thiefs) are caught inside the town, they have to give it back. But if they make it out, the rightful owners have to buy the Maibaum back. And often, this payment is in the form of – you guessed it – Bier (beer)!

Of course, like many things in German, we like to turn them into very long words. As is the case with the Aufstellen of the Maibaum – or das Maibaumaufstellen (the Maypole placement)!

What about the Coronavirus?

Since this Maibaumaufstellen is accompanied by a celebration and a Prozession, how is it celebrated now, in times of the Coronavirus where coming together is not possible?

Well, in Bayern, there are different approaches. Some places simply put up the Maibaum, because in times like these, people need some Normalität (normality), they argue. But without the celebration, of course. This is also the case in other places. The Maibaumklau is not allowed in many places, for obvious reasons. If it is practiced anyway, you could get fined.

Other places find more creative solutions. Can’t gather for a big Maibaum? Make your own little one, take a picture, and win a Gutschein (voucher)! See the video above.

But in many places, the entire Maibaumaufstellen is cancelled. It’s a real shame, but that’s just how it is!

Do you celebrate the Maibaum tradition, or something similar to start the warm time of the year? What do you think of the tradition? Let me know in the comments below!