Witches In Germany’s Harz Mountains Posted by Constanze on Oct 29, 2018 in Holidays, Traditions

Guten Tag! Recently I gave you the creepy story of Walpurga Hausmannin, one of Germany’s most famous witches from the 16th Century. In today’s post we’ll continue on the witch theme by talking about a place in Germany that is famous for its association with witchcraft.

To get to this place you need to visit Sachsen-Anhalt (Saxony Anhalt) in Norddeutschland (northern Germany), and go to a beautiful region called the Harz Mountains. Here there are plenty of hiking trails that can take you to enchanting places with some very interesting stories and legends attached to them, such as:

By Unknown – This image is available from the United States Library of Congress‘s Prints and Photographs division under the digital ID ppmsca.00496. Public Domain, Link

The Hexentanzplatz (‘Witches’ Dance Floor’) is in a place called Thale, high up in the Harz mountains. In pre-Christian times, this was where many pagan ceremonies were held. It is a big tourist attraction now. You can get a gondola up to the Hexentanzplatz, which gives you incredible views of the mountains and valleys below. One of the walking trails here is called the Harzer Hexenstieg (‘Harz Witches’ Trail’), which runs through the Harz mountains, and over their highest peak, known as the Brocken. This trail is 100km long.

A sculpture of a witch at the Hexentanzplatz. By Jed – Own work, CC BY-SA 3.0 de, Link

A rock formation in the Harz mountains near the Hexentanzplatz, the Teufelsmauer (‘Devil’s Wall’) is known for its unusual formation. The legend behind this wall is that God and the Devil were fighting for ownership of the Earth. The Devil was given a limited amount of time to build a wall that would separate the Earth into two pieces, one for him and one for God, but he ran out of time, so in his anger he smashed up what part of the wall he had made. This left the unusual formation that is the Teufelsmauer, and is the legend of how the Teufelsmauer came to be.

The Roßtrappe is a 403 metre-high cliff in the Harz mountains. The Hexentanzplatz (see above) and the Roßtrappe are separated by a big gorge. According to legend, a princess called Brunhilda tried to flee forced marriage to a giant called Bodo by taking his horse and leaping across the gorge to safety. She and her horse made it successfully to the other side, while the giant, Bodo, fell to his death. The Bode River that runs through the mountains is named after him, as is the Bode Valley below. This mountain area has been called Roßtrappe ever since. The word Roßtrappe literally means ‘steed clip-clop’, using the words der Ross (steed) and trappen (clip-clop – the sound a horse’s hooves make). There is an imprint in the rocks that people believe to be the horse’s footprint from when he jumped across:

By Dolos at German Wikipedia – Transferred from de.wikipedia to Commons., Public Domain, Link

“There is a mountain very high and bare…whereon it is given out that witches hold their dance on Walpurgis night.”
Jacob Grimm, 1883 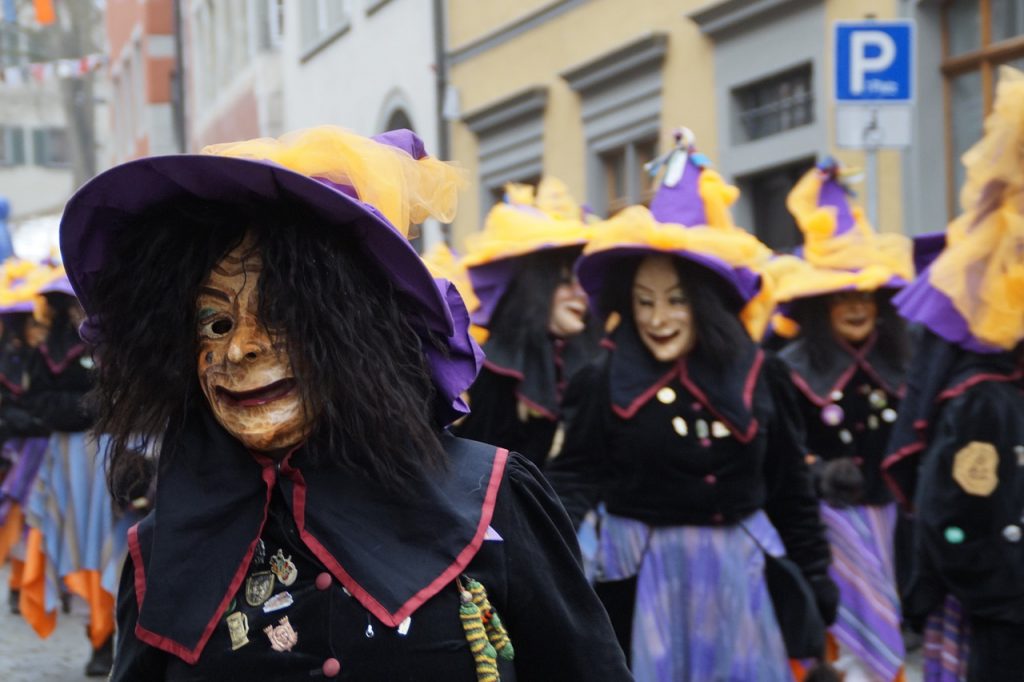 Walpurgisnacht is a modern-day celebration of spring, celebrated in Germany on April 30th. It is sometimes seen as Germany’s ‘other Hallowe’en’. According to folklore, the place known as Hexentanzplatz was the original location where witches gathered on April 30th to celebrate the arrival of spring. Here they would dance and fly above the mountains on their broomsticks to welcome in the new season. April 30th also became a Christian celebration of Saint Walpurga, who it was said could ward off evil spirits. Along with celebrating Saint Walpurga, people would make loud noises and light bonfires as ways of keeping the witches away. Today, Walpurgisnacht is similar to the Hallowe’en celebrations on October 31st. Many people dress up as witches and dance on Walpurgisnacht. Here is a video of one such dance:

The Harz mountains and the stories attached to them have inspired aspects of modern German culture, too. For instance, the popular, modern-day kids’ cartoon called Bibi Blocksberg, which tells the stories of a young German witch. Bibi’s surname was inspired by the mountain range Blocksberg, more commonly known as Brocken – the highest peak of the Harz mountains, where all of the above takes place!

If you enjoyed this post, you may also like this one: What is Hallowe’en like in Germany? Here you will find details of different Hallowe’en celebrations associated with different religions. If you’d like to learn Hallowe’en-related vocabulary instead, see this post: Halloween vocabulary in German.