Seven reasons to like the transport system in München Posted by Constanze on Jun 29, 2014 in Culture

Public transport is generally not something to get excited about. In London, at least, travelling by train or bus can be a stressful, claustrophobic, and somewhat unhygienic experience. But each time I get a train in München, I am always pleasantly surprised by what a nice experience it is. Last time I was in München, I decided to make a list of the reasons why I like the transport system there. 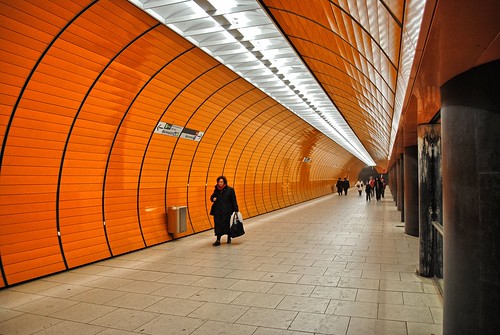 Marienplatz U-Bahn Station. Photo by dh87 on Flickr.com is licensed under CC BY-SA 2.0

Reason #1: The U-Bahn (underground train line) never feels cramped – even at peak times. I have a suspicion that the U-Bahn trains are wider than the ones in the London Underground, which could be the reason why. I noticed a few seats on the U-Bahn even had little shelves next to them, which is another practical detail that I really like about them. It’s good to know you can put your bag down somewhere without having to remove it when it starts to get busy.

Reason #2: The U-bahn has phone signal. Don’t ask me how, but you can send texts and make phone calls on the U-Bahn. Pretty handy, isn’t it?

Reason #3: Multimedia. At some U-Bahn stations there are TV screens showing you things like the weather and news headlines, so you can catch up on the news while waiting for your train to arrive. This screen then changes to a notice saying “Zug fährt ein” – “Train approaching”!

Similarly, on some U-Bahn trains there are TV screens which tell you which stop is coming up next. They have these on buses in München, too, which I find really helpful. In general, I don’t like taking the bus, because if you don’t know the area then there’s no way of knowing which stop you’re supposed to get off at (other than a grumpy bus driver’s impatient wave, if you’re lucky)! So it’s useful that they have these information screens on the buses in München.

However, one screen I saw on a U-Bahn train went even further than that: As well as telling you which stop was next, it told you where you could go to from that stop, which line you’d need to get on for all possible stops, which platform to go to, and in how many minutes all of those trains would leave. How incredibly efficient is that?!

Reason #4: No ticket barriers. Getting around München by public transport is ridiculously easy. Unlike the UK train system, which insists you pass your ticket through a ticket barrier at every step of your journey (and then show an inspector your ticket when on the train), all you need to do in München is this:

Yes, it’s true: There are no ticket barriers!! What’s great about this is that you don’t have to fumble around with tickets while struggling with your luggage, coffee, and other things. You can move freely in and out of Bahnhöfe (train stations), and also make bus journeys with your ticket safely tucked away in your bag the entire time. In most cases, you won’t even need to take it out again once you’ve validated it and put it away. It’s so easy!

Don’t let this fool you into thinking that you can get away with not buying a ticket, though. Fahrkartenkontrolleure (ticket inspectors) do exist on the U-Bahn – though, personally, I have never had one ask to see my ticket (Note: On S-Bahn trains they check tickets on-board for every journey).

Reason #5: The Bayern Ticket. This costs about 22€ for one person, and then an extra 4€ per person (up to 5 passengers allowed on one ticket), and gives you unlimited travel on regional trains (incl. U-Bahn, buses, trams) for one day, around the entire state of Bavaria! You can even visit Salzburg in Österreich on it and, with a Bayern-Böhmen Ticket you can get as far as the Bohemia region of Czech Republic. Pretty good value, in my opinion!

When you buy a Bayern Ticket, you must declare how many people are travelling on it. Before June 2012 you did not have to declare this, so technically you could ask a stranger at a train station if they had a Bayern Ticket, and then split the cost with them to make it cheaper for all of you to travel. The only condition was that you sat together during the journey, so that when the ticket inspector came round you could tell them exactly who was included in the ticket. This happened to me once; a guy came up to me and my then-boyfriend to ask if he could give us some money and share our Bayern Ticket. We happily obliged – we saw no reason not to. However, the rules were changed in 2012 to stop exactly that from happening… oops!

Reason #7: The stations are like works of art. The U-Bahn and S-Bahn stations in München are wonderful to look at. As you pull in to a station you’ll see it has a different colour scheme or design to the last one. Here are a few photos, so you can see what I’m talking about:

I am sure there are more, but for now these are my seven very good reasons for liking the München transport system. I am trying to think of something I don’t like about it, but I can’t think of anything. Do you have anything (good or bad) to add? It need not be about München in particular.

To finish, here is some handy vocabulary for getting around in München:

Schnellbahnnetz – Train map of all S-Bahn and U-Bahn lines

Bitte zurückbleiben – Please stand back [from the doors]

„Noch jemand zugestiegen?” – “Has anybody joined since the last stop?” (You might hear ticket inspectors say this when walking through the trains)

Ausstieg rechts/links – Exit right/left (Sometimes you’ll hear this announcement, which tells you which doors to use to leave the train)