All countries have some sport that has some tradition, or that is extremely popular. The United States, for example, has American football, baseball and basketball. Brazil and Germany have football/soccer, the British have rugby and cricket, the Canadians ice hockey… But what about the Swiss? There are actually three national sports. And I have never heard of any of them and I am from the adjacent Germany! So, let’s explore what they do down there! Today, we start with Schwingen.

Other posts in the series: 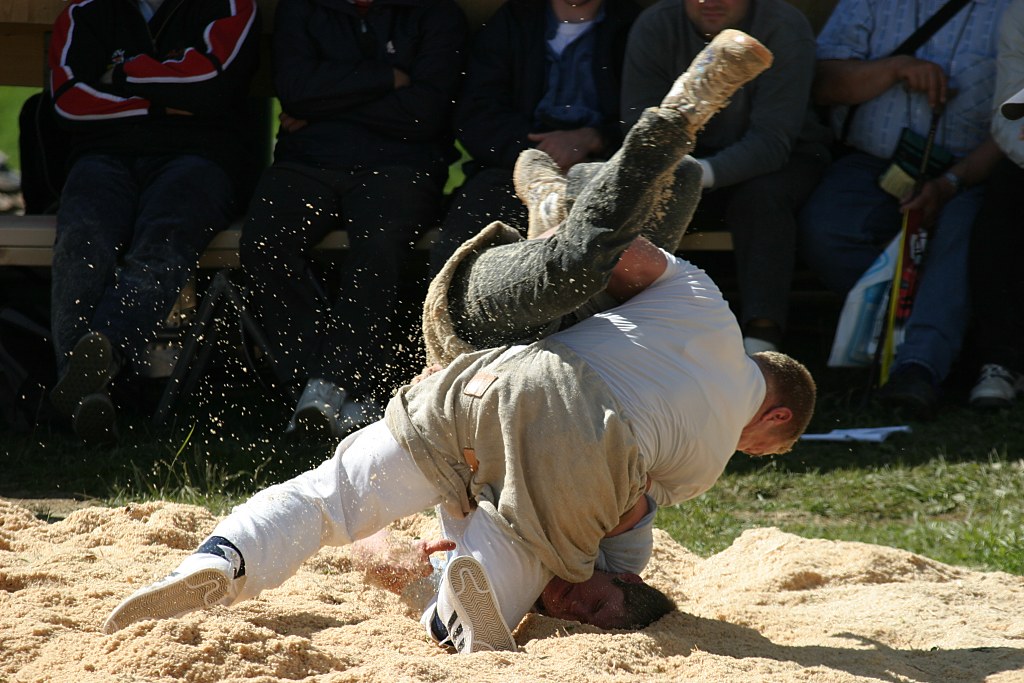 Schwingen is practiced on Sägemehl (sawdust) (Image by Roman Koch at Commons.wikimedia.org under license CC BY SA 3.0)

In German, a swinger club is definitely not related to a sport. In Switzerland, they would probably think about this sport, though. Schwingen is a kind of wrestling, where both sportsmen wear a Hose (pants) made of Zwilch (drill). After the opponents give each other a hand, they grab each other by that Hose and try to get the opponent with the back on the ground. They do this with Schwüngen (swings). The Kampf (fight) ends when the winner holds the Hose of the loser with at least one hand and when the loser touches the ground with both shoulder blades or at least with two third of his back. After the fight, the winner traditionally pats off the Sägemehl off the back of the loser.

A match is called Schwingfest (swing fest) or Schwinget, and is held on a round pitch of 7 to 14 meters in diameter. It is filled with Sägemehl (sawdust) to make the ground a bit softer.

There are many different ways to grab somebody, just like with other martial arts. To get an idea, check out this video:

Traditionally, the last names come before the first names when they announce the fighters, as you might have noticed in the video. Also, the Swiss have a great taste of music!

Oh and an incredible dialect.

What does Schwingen mean?

Schwingen itself means “to swing” in German. It comes from the moves in the sport, the Schwünge (swings), where you grab the opponent by the pants and try to throw them on the back. That’s a Schwung.

Another unofficial word for the sport is Hosenlupf. Lupfen means “to lift”, in the same way as anheben. So a Hosenlupf is a “pants lift”. And that is what’s happening: The opponent’s pants are lifted in the air!

In English, it is also known as Swiss Wrestling or Alpine Wrestling.

Schwingen is very popular in Switzerland, but the sport has a very amateuristic nature, even if the athletes have nation-wide fame. Every three years, there is a competition for the Schwingerkönig (“swinger king”), who keeps the title for three years. The best Schwinger of the country are also known as die Bösen (the bad ones). Quite a title!

What do you think of this sport? Did you know it before? Could you imagine practicing it? What’s the national sport of your country? Let me know in the comments below!