The Most Important Day in the Year for Germany: Tag der deutschen Einheit Posted by Sten on Oct 3, 2016 in Culture, Holidays, Language

Many countries have a national day, on which they celebrate or remember an important day in the history of the country. This can be an independence day, for example. The Germans do not have an independence day. Instead, they have a Day of German Unity. And it is celebrated today, October 3rd!

What is meant by Deutsche Einheit? 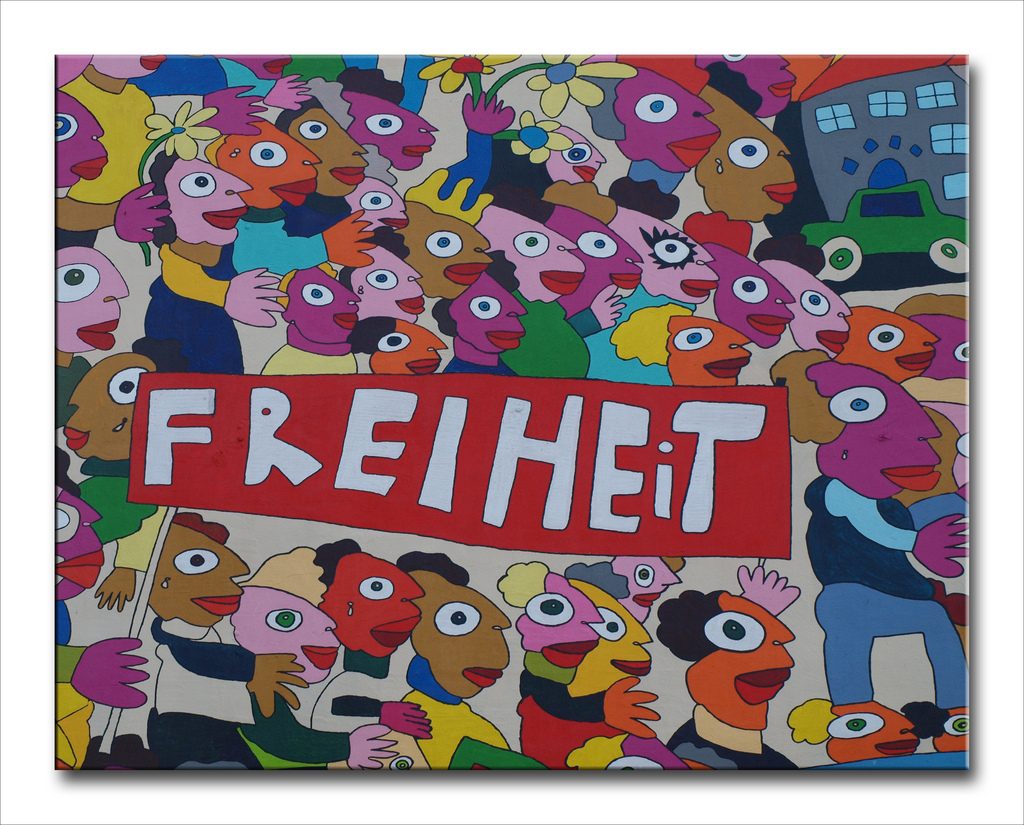 Freiheit (Freedom). The Germans were finally free again from any other regime, and east and west could live together again. (Image by Harald Henkel at Flickr.com under license CC BY ND 2.0)

Deutsche Einheit (German Unity) refers to the Wiedervereinigung (reunification) of East and West Germany in 1990, a year after the Berlin Wall came down together with the DDR (Deutsche Demokratische Republik (GDR (German Democratic Republic)). So on this day, the unification of Germany as a whole is celebrated. In 1949, the western allies decided to found the Bundesrepublik Deutschland (Federal Republic of Germany), also known as West Germany. In the following decades, this reunification was worked towards, and finally achieved 40 years later. East Germany joined West Germany, and so also today, Germany is known as the Bundesrepublik Deutschland. The merging did not go reibungslos (smoothly), and differences persist even today.  Click here to read a post that explains more about the Wiedervereinigung and its implications.

So, what is the Tag der deutschen Einheit? It refers to June 17th, 1953. Around this day, East Germans protested against the DDR regime, because their needs were neglected and many were against the quick establishment of socialism. This Aufstand vom 17. Juni (Uprising of June 17th) was bloodily crushed by Soviet Army. As a display of solidarity with the people, and as an action toward reunification, West Germany (i.e. the Bundesrepublik Deutschland) made the 17th of June its National Day, and called it Tag der deutschen Einheit. This bloody event is still remembered today on June 17th.

Watch the video below to learn more about the 17th of June.

Every year, the Tag der Deutschen Einheit (so now we are talking about October 3rd again!) is celebrated in a different city. This year, it is celebrated in Dresden in the East German Bundesland (federal state) Sachsen (Saxony). Watch the trailer below. Click here for the website with more information.

The celebrations already started this weekend, and the finale is on the 3rd of October itself. The day is celebrated like you would expect on a national day: fireworks, speeches from important people, music and festivals, party and a display of unity. Unfortunately, Dresden was hit by an attack last week, when two bombs were detonated. One was at the Congress Center, where the Bundespräsident (Federal President) Joachim Gauck is supposed to speak today. This means that there is more security than ever: 2600 Beamte (officers) either in uniform or zivil (in plainclothes) are securing the events. Brücken (bridges) and other constructions were checked – but nothing Verdächtiges (suspicious) was found.

Despite such threats, it should be a great party! Not only in Dresden, but all around the country, there are celebrations with live performances and of course a lot of Bier (beer). Enjoy!