The Story Behind A Strange German Greeting: Hummel, Hummel! Posted by Sten on Sep 3, 2021 in Culture, Literature, Traditions, Travel & Geography

If you’ve wandered the streets of Hamburg, you may have heard a weird greeting. One shouts Hummel Hummel!, and the other will answer mors, mors! And they’ll just move on with their day as if nothing happened. What does that greeting mean, and where does it come from? It’s a cute story, and there is quite some historic significance to it that can be seen to this day.

The Märchen of Hans Hummel

Back in the day, many people in the German city of Hamburg did not have access to clean drinking water. While a river runs through the city, and it is known for its many waterways, a lot of that water was verschmutzt (polluted) with Abwasser (n, waste water) from Brauereien (breweries), or the canals simply acted as a sewage system. So, if you wanted clean water, you needed to go fetch some water at der Brunnen (well). If you didn’t want to schleppen (to schlepp) all that water around town, you could pay for der Wasserträger (water carrier/water boy). He could bring the water all the way from der Brunnen into your home! Wie praktisch (how practical)!

One infamous Wasserträger of Hamburg was Hans Hummel. His actual name was Johann Wilhelm Bentz, and he lived from 1787 to 1854. Hans is a Rufname (m, forename) of Johann. Hummel comes from a Christian Hummel, a known man who had lived in Bentz’s house. According to the Märchen (n, fairytale, urban legend), he was a missmutiger Mann (sullen man), who was always am schimpfen (cursing) due to the schwere Last (heavy burden) of the water he had to carry. Because the Wasserträger could not put their buckets down easily, they were an easy victim of teasing children. Especially Hans Hummel was loved by the kids, as he would always react strongly to their teasing. One day, they shouted Hummel, Hummel! to annoy him. While he would normally just walk along and shout things at them, this time was different. He put down his buckets, and ran after those brats. But they were quicker than him, and fled in all directions. But one child stopped in his tracks to pull down his pants to Hummel and show him his bare buttocks! This did not annoy Hummel further, but actually made him laugh. Mors, mors! he said. Mors is a word from Hamburg that means “buttocks”. This reaction shocked the children, and it changed their relationship to the root. From now on, every time they would meet, the kids would shout Hummel, Hummel! and Hummel would answer Mors, mors! And so, a new greeting was born that is being used to this day.

There is an alternative version of this story, too. Here, he simply shouts at the kids in anger, as he cannot put his buckets down, mors, mors!, meaning as much as “kiss my ass!” in Plattdeutsch (Low German). Nice greeting!

So if you hear Hummel Hummel! – Mors, Mors!, it’s simply a friendly greeting between two Hamburgers. Hm. It feels weird to write it like that. 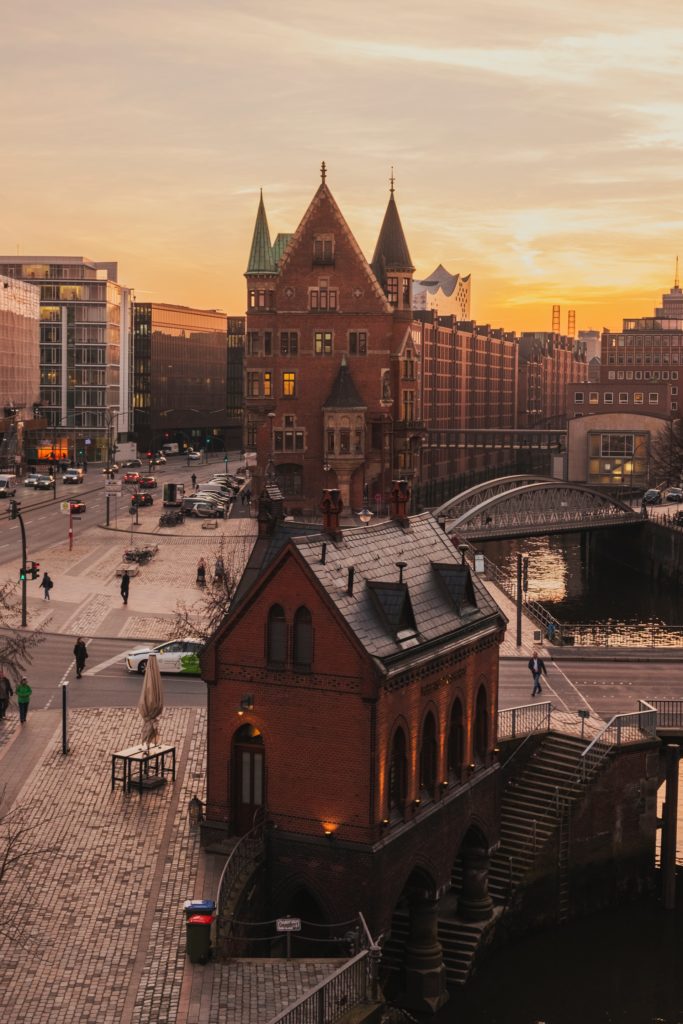 Hans Hummel is an icon of Hamburg. He is now known as a Stadtoriginal (“city original”, a person with original, recognizable traits), and he is a bit like a Wahrzeichen (n, emblem) of the city. There are many Denkmäler (n, memorials) and Orte (m, places) named after Hummel, such as the Hummelbrunnen. Furthermore, in the early 2000s, there was a Skulpturenparade (sculpture parade) set up by the city. More than 100 statues of Hans Hummel made of glass fiber were placed all around the inner city. While most were versteigert (auctioned off), some can still be seen in the city, for example in front of the Panoptikum, Germany’s oldest wax statue museum. And at the corner of the Memel-Haus, you can find a statue of a child that shows you its mors!

Do you want to learn about other (more common) ways that Germans greet each other? Check out our post on German greetings!

Have you heard of this greeting before? Are there other odd words and greetings you’ve heard before? Let me know in the comments below!