The World’s Narrowest Street – In Germany! Posted by Constanze on Jun 17, 2020 in Culture, Holidays

Guten Tag! Have you ever wondered whether Germany holds any records for anything? Well, here’s one – Germany is home to the narrowest street in the world!

According to Guinness World Records, the world’s narrowest street is located in Reutlingen, Baden-Württemberg, Germany. It is called Spreuerhofstraße, and here are its measurements:

at its narrowest: einunddreißig Zentimeter (31 cm)

at its widest: fünfzig Zentimeter (50 cm)

Spreuerhofstraße is located between two Häuser (houses). It was reconstructed in 1727 after a fire destroyed the city in 1726. There is nothing to see in Spreuerhofstraße except the Wände (walls) of the two houses it lies between. The street signs at either end of Spreuerhofstraße read, in both German and English:

Opinion on Spreuerhofstraße is mixed, with some saying it’s barely a street and should be called an alley, instead:

Spreuerhofstraße has even been in danger of losing its world record title due to a leaning wall from one of the houses restricting movement as you walk down it. If the street becomes too eng (narrow) to walk down, it can no longer be called die Engste Straße der Welt. However, as far as I can tell – correct me if I am wrong! – it has not lost its title yet.

Spreuerhofstraße is an important tourist attraction for Reutlingen, with tourists from all over the world visiting to walk down the street and take photos next to the street sign. 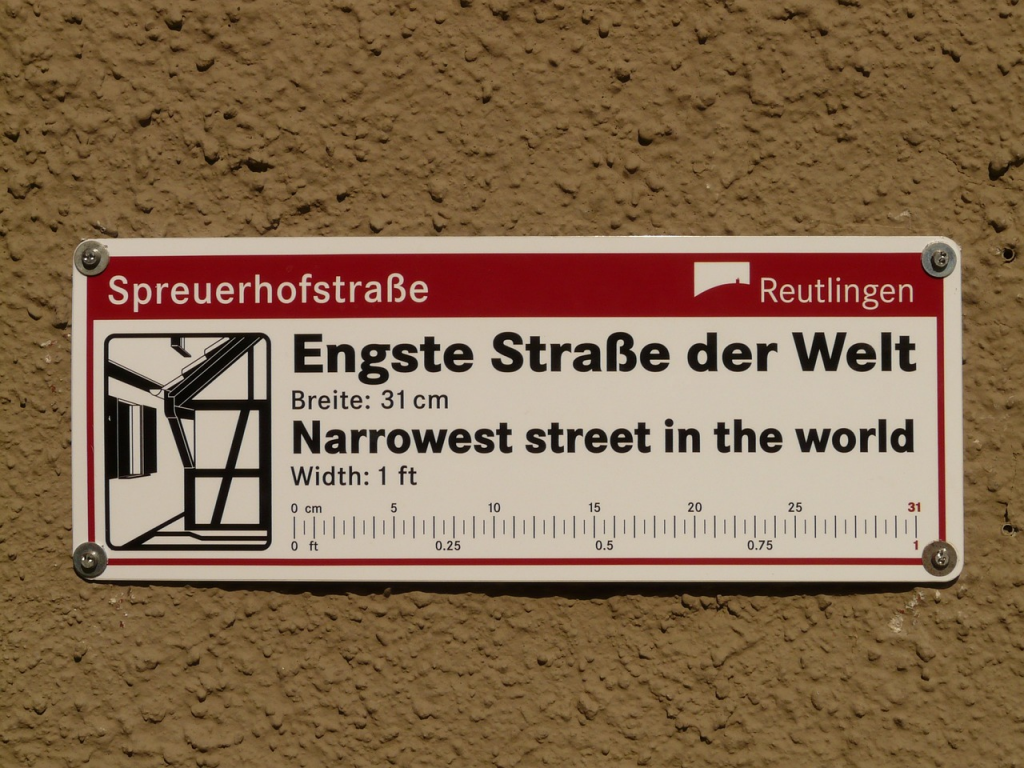 Reviews on Tripadvisor are greatly mixed, with some saying, ‘muss man einfach sehen!’ (‘absolutely a must-see!’), and others calling the street ‘eine Zeitverschwendung’ (‘a waste of time’).

What’s your opinion? Do these kinds of tourist attractions interest you when you travel? And if you went to Reutlingen, would you seek out die Engste Straße der Welt?