Guten Tag, and willkommen to another post on untranslatable German words!

The word of today is Torschlusspanik. 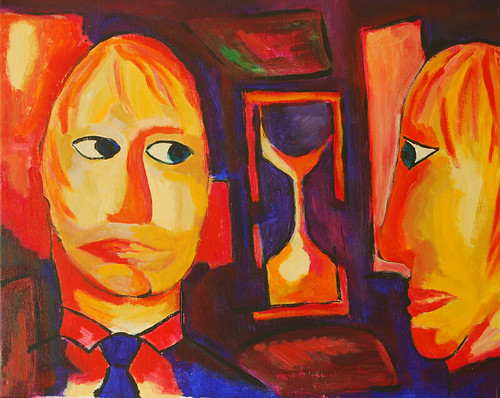 Torschlusspanik! Photo by artbystevejohnson on Flickr.com under CC BY 2.0

What is the meaning of Torschlusspanik?
This is the fear that time is running out. It describes the panic you get when you realise one day that in actual fact, you haven’t done very much with your life, and if you don’t act soon then you may miss out on more opportunities as time passes and the ‘gate closes’.

What does Torschlusspanik literally translate to?
The word can be broken down into three smaller words.
Tor: Gate
Schluss: Close (from the verb schließen – to close)
Panik: Panic

So the literal translation of Torschlusspanik is ‘Gate close panic’!

What is the nearest English equivalent?
The term ‘Mid-life crisis’ is most commonly associated with Torschlusspanik. But this is a term, rather than a word. As far as I can tell, there is not an individual word to describe this feeling in English.

History and use of Torschlusspanik
An interesting fact about Torschlusspanik is that the word refers to a phenomenon from the Mittelalter (medieval times). More specifically, it refers to the Panik (panic) that Stadtbewohner (city residents) felt just before dark, or if there was an imminent attack on the city, as they all had to rush to get back before the Stadttore (city gates) closed. If they didn’t get back in time, they’d be locked out for the night, exposed to Diebe (thieves), Angreifer (attackers), or other undesirable people.

The term Torschlusspanik was also used in Time Magazine on 18 August 1961, to describe the sensation of East Germans flooding into West Germany when the country was divided:

“Last week a curious and serious malady was affecting Communist East Germany and reaching almost epidemic proportions. The name of the disease was Torschlusspanik, which literally means ‘fear of gate closing’. Everything East German leaders did to shut off the flow of refugees to the West seemed, instead, to spur it on. The day that Deputy Premier Willi Stoph announced new secret measures to halt the refugees—ostensibly at the urging of “delegations of workers”—1.532 East Germans beat it over the border and checked into the big Marienfelde refugee center in West Berlin.”

Nowadays, this word is used metaphorically. It describes the feeling that time is running out for things like career opportunities, marriage and having children.

I think this is a sensation felt worldwide, regardless of nationality and culture. I am curious to know whether you have a version of this word in your own language. Do let me know if you do!

To have children – Kinder haben