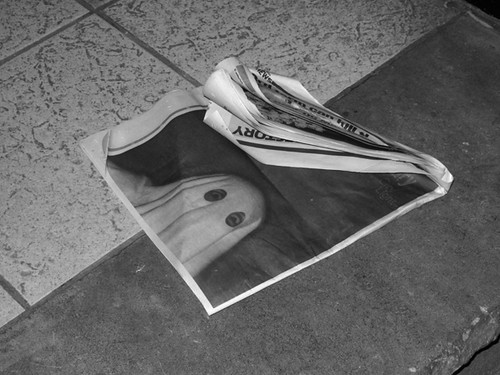 Photo by jonfeinstein on Flickr.com under CC BY 2.0

Guten Tag! Here’s another little German language lesson in the form of an untranslatable German word – and today there are a few other words thrown in for good measure.

Before I tell you what this word means, here are some similar-looking words, along with their meanings. You will see why these are relevant in a moment:

Following the pattern above, you can logically conclude that Geisterfahrer means ‘ghost driver’ – as in, a ghost that is driving a car, or perhaps a car that isn’t really there. The word is made up of the words Geist (ghost/spirit) and Fahrer (driver).

However, while Geisterbahn, Geisterstadt and Geisterschiff are all quite literal in meaning, Geisterfahrer is much more intelligent than its fellow ghost-related words; it does not refer to a ghost, but to a person who is driving on the wrong side of the road. This is clever because it suggests that a) that driver is somewhere he shouldn’t be (like the aimlessly wandering ghost), and b) if you drive on the wrong side of the road, you could have a fatal accident – and then you really would be a Geist!!

You only need to look up ‘Geisterfahrer’ on Google to see all of the headlines that come up. For example, ‘GEISTERFAHRER-SCHOCK AUF DER AUTOBAHN’, from Bild.de (you can watch the video here, if you fancy hearing a bit of German news!).

Another word for Der Geisterfahrer is Der Falschfahrer, which literally means ‘the false driver’. The meaning of the words is the same, but in my opinion Falschfahrer does not have as much impact as Geisterfahrer does. The word Geisterfahrer really emphasises the consequences of the action it is describing, which is why it is such an interesting word.

The words Geisterfahrer and Falschfahrer are not to be confused with a similar word, Der Schwarzfahrer, which means “Black Rider” (Schwarz = black, Fahrer = rider, in this context). This refers to someone who uses public transport without buying a ticket. The word translates to ‘rider’ instead of ‘driver’ because while one drives a car, one rides public transport, and the word fahren can be used for both.

Here’s a confession: I was a Geisterfahrer for about 2 seconds the other week on my way out of the Morrisons car park. Luckily I was going about 1mph and someone beeped me back into the right lane. I felt stupid.

Have you ever been a Geisterfahrer, or had experiences with a Geisterfahrer? What do you think of this word, considering its literal meaning? Personally, it sends chills up my spine!