Untranslatable German Words: Tante-Emma-Laden Posted by Sten on May 18, 2017 in Culture, Language, Traditions

We all have this Großmutter (grandmother), Onkel (uncle) or Tante (aunt) that complains that all the big Supermarktketten (supermarket chains) are taking over, and there is no space left on the market for the small shops, wie es früher mal war (like it once was back in the day). So as a sign of resistance, Tante Emma opened her own little grocery store. That is a Tante-Emma-Laden, right? No?

A German Lebensmittelladen in the 1950s (Image by Jty at Commons.wikimedia.org under license CC BY 2.5)

Simply put, a Tante-Emma-Laden is a small Lebensmittelladen (grocery store). It is a small corner store where you can buy Lebensmittel (groceries) and many other products you might need – you will be surprised by the variety of products offered at such a small store! It is much more personable than a large Supermarkt such as a German Aldi, Lidl or Rewe (comparable to American Safeway, Walmart or Albertsons). 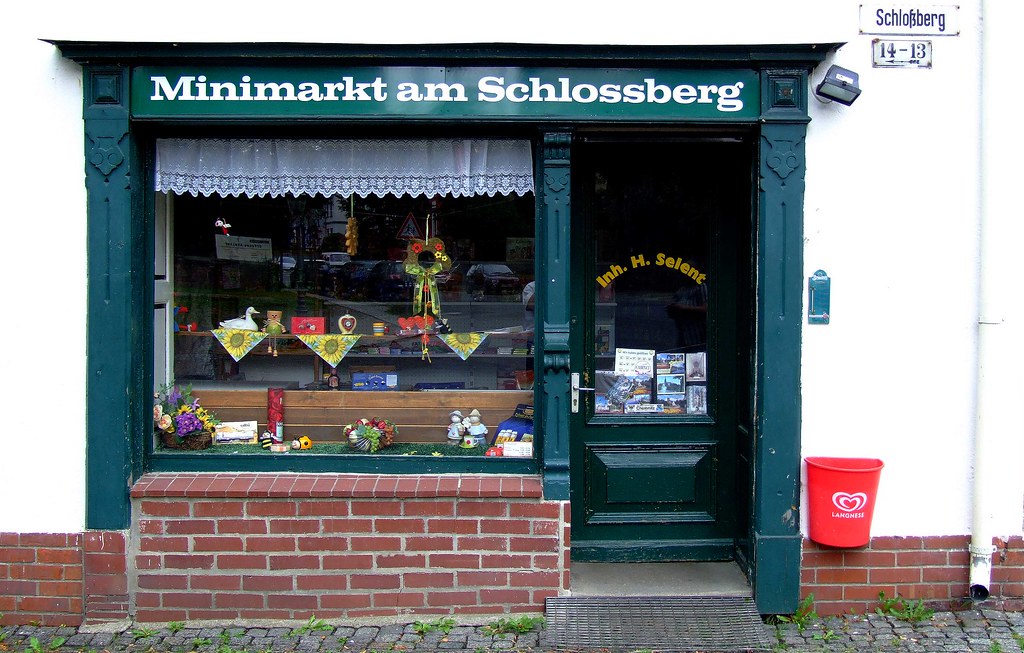 A Tante-Emma-Laden (Image by gravitat-OFF at Flickr.com under license CC BY 2.0)

Literally, Tante-Emma-Laden means “Aunt-Emma-Store”. Many of these small Tante-Emma-Läden emerged after the Second World War, and were typically run and owned by families. The employees are more likely to help you find what you need. The word Tante-Emma-Laden, as these stores are called in everyday language, came from the women who often worked in such stores. During the 1950s, Emma was a general term for a maid, or a person giving a helping hand. A Tante (aunt) is often – or at least was, back in those days – someone trustworthy you knew. Because the Tante-Emma-Läden are usually right in the neighborhood, many shoppers know the shop owner personally. In many cases the women working there fit this perfectly. Or they had many such traits: They were helpful, friendly, personable – just like your aunt Emma!

Unfortunately, the amount of Tante-Emma-Läden has been on the decline ever since large Supermarktketten spread. However, there is a nostalgic push back to old times, and some new Tante-Emma-Läden are opened, and others are preserved!

The use is really simple. Colloquially, you can always use it, no matter the context. In a more formal manner, it makes more sense to refer to it as a kleiner Lebensmittelgeschäft (small grocery shop). Norbert van Tiggelen made a Gedicht (poem) about Tante-Emma-Läden, which you can read below. I made a translation further below!

No fight over a shopping cart,
Also no children shouting loudly,
Blood sweat and tears in the shelves,
from the sliced bread to the organic egg.

On the cold counter they shone,
well-polished cookie jars,
couldn’t find a moody customer,
Who found himself coldly in the wrong isle.

A piece of sausage at the counter,
was given into children’s hands,
If there was no money left to spare,
you got a credit until the month’s end.

How much I liked to go as a small kid,
into these wonderful little stores,
where I was always asked with a gentle voice,
“Would you like to have anything else?”

Getting groceries at the street corner,
without stress and in harmony,
while chatting with the neighbor,
that was nostalgia, purely.

Thank you for reading! Are there such things as Tante-Emma-Läden where you are from? How are they called there? Also, would you prefer to shop at a supermarket or a Tante-Emma-Laden? Let me know in the comments below!