Guten Tag! It’s time for another ‘untranslatable German word’ – one of those words that, no matter how hard you try, you just can’t find an equally quirky, unusual or downright funny translation for in English! The untranslatable words I’ve shared with you here have mostly been nouns, but this time I’m giving you a verb, and that verb is versemmeln.

Versemmeln is a verb meaning ‘to fail’ or ‘to mess something up’ – and to mess it up in such a way that it can’t be fixed.

What is the literal translation of versemmeln?

It literally means ‘to ‘bread-roll’ or ‘to be bread-rolled’. But what’s bread got to do with anything?!

The verb versemmeln is inspired by these: bread rolls. Photo by rubber_slippers_in_italy on flickr.com under a CC license (CC BY-ND 2.0)

The word Semmel in versemmeln is a German word for bread roll. You may have heard bread rolls called Brötchen – the word used varies from region to region. With the word Semmel (or indeed any noun), by adding the prefix ‘ver’ and the ‘n’ on the end you can create a verb out of it. The prefix ‘ver’ is very versatile and has a number of different meanings, but one way it is used is to talk about something that’s gone wrong, and this is the most applicable here.

Example:
Ich habe mich verfahren – I have driven the wrong way (in which the verb fahren means to drive)

Versemmeln means you’ve messed something up in a way that can’t be fixed. Why? Because once you slice a bread roll, you can’t put it back together again! Makes sense, I guess?! 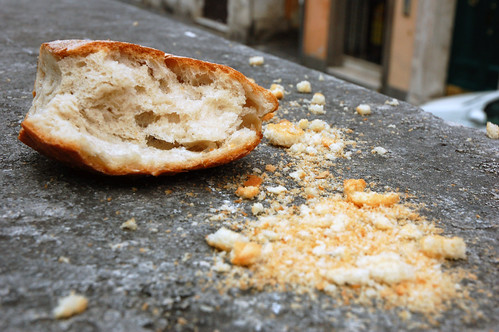 Once you slice bread, you can’t put it back together again. It has been versemmelt. Photo by simonbleasdale on flickr.com under a CC license (CC BY-ND 2.0)

How would you use the word versemmeln in a sentence?

The conjugation of this verb in the present tense would look something like this!

Anyone got any food-related ways of saying you’ve failed or messed up in English (or any other languages, for that matter)? I’ve found just one, and it’s a phrase: To say someone has ‘had one’s chips’. This phrase means you’ve completely failed with what you set out to achieve. Do you have any more to add? Leave a message in the comments!

Hope you’ve enjoyed learning about another brilliantly quirky German word. Perhaps next time you want to tell someone in German how badly they’ve messed up, you can hit them with ‘Du hast das versemmelt!’ – ‘You’ve bread-rolled it!’ 😉