Why Bavaria Party Supports Scottish Independence Posted by Constanze on Sep 13, 2014 in Uncategorized

When I was last in Bayern there was an upcoming election, and the streets were filled with campaign posters for the different political parties. The one that stood out to me the most was the rather satirical poster for the Bayern Partei – the Bavaria Party. This is what it looked like: 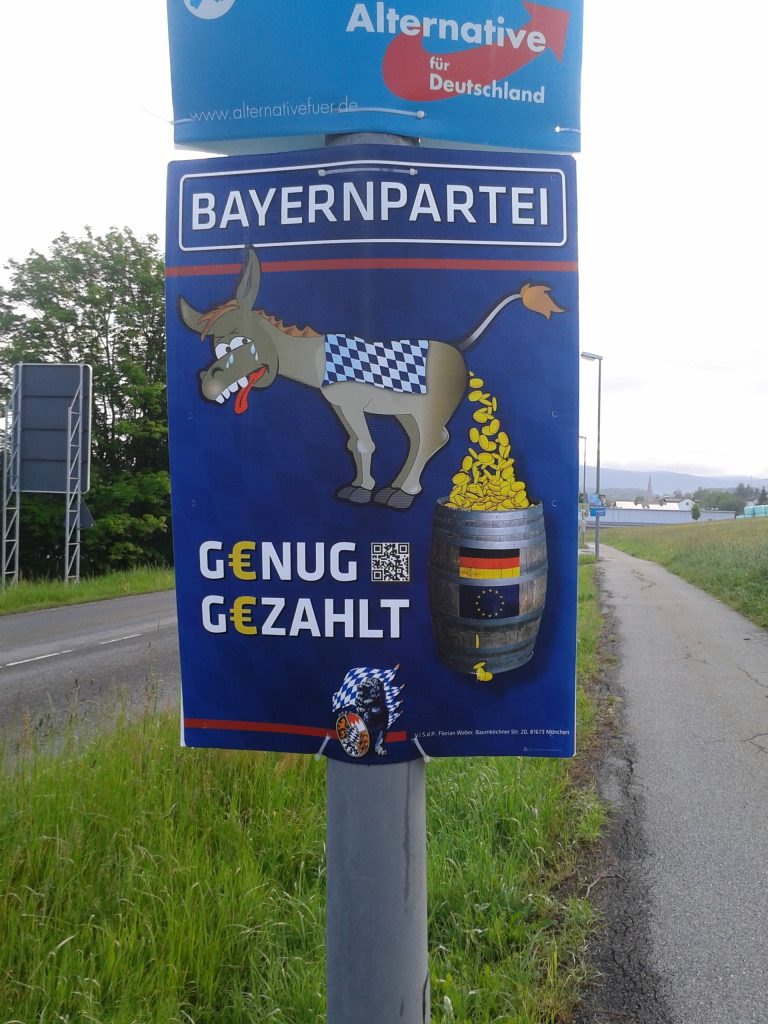 What I liked about this poster was that, even if you didn’t know a single thing about German politics, the Bayern Partei’s stance was obvious: We want Bavaria’s independence. And, like all good satire, the poster also sends a clear, blunt message to the rest of Germany and Europe: You see Bavaria as the idiot donkey who craps out money every time you come calling for help. But if we have so much money to give, then we also have the power to fund ourselves as an independent state. In other words: We don’t need you.

Aside from the financial reasons, it is easy to see why the Bayern Partei wants Bavaria to be independent from the rest of Germany; it has its own culture, distinct from that of the other German states. The Dirndl and Lederhosen you associate with Germany are traditionally Bavarian, and Oktoberfest, one of Germany’s most famous and most popular annual events, takes place in the Bavarian capital, München.

Then there is the language issue: The dialects spoken across Bavaria are so different from Hochdeutsch that many regard Bavarian as a language in its own right. Even native Germans from other parts of the country can struggle to understand the Bavarian language/dialect, which just shows how different it is to Hochdeutsch. There are no other German states with a dialect so far removed from Hochdeutsch. If you’d like more facts about the Bavarian language, I’ve written a post about it here.

Furthermore, Bavarians as a whole are proud of their culture and language, with many viewing themselves as Bavarians, rather than Germans.

A few days ago, the Bayern Partei published a message on their Facebook page expressing their support for Scottish independence (the voting of which will take place on 18 September). The message was entitled “Schottische Unabhängigkeit: YES!” (“Scottish independence: YES!”), and here is one extract from their message:

Translation:
“That one state should become independent of a larger one is nothing new. In Europe alone, there are many examples of this happening. One fairly recent and positive example is the separation of Czechoslovakia into the Czech Republic and Slovakia. Both of these countries are better off following their separation. Both are EU member states and maintain a good relationship with each other. And on a side note – both of these countries are smaller than Bavaria.”

But why would Scottish independence be of such importance to a Bavarian political party? The Bayern Partei end their message by explaining exactly that:

Translation:
„It would be a real support to us Bavarians, and it would make it harder for the German media to ignore this subject, or make a joke out of us.”

As a Brit, I’m trying to come to terms with the possibility of a United Kingdom without Scotland. But what do you think to a Germany without Bavaria (or to a Bavaria without Germany)?

Do you think it will have a positive impact on Bayern Partei if Scotland gets its independence? Is Bavarian independence even a good idea, in your opinion? I’m interested to hear everybody’s views on this, German or not!