Israel’s vaccine drive against COVID Posted by Ayana on Jan 4, 2021 in Uncategorized

On December 9, 2020, the first batch of coronavirus vaccine landed in Israel. 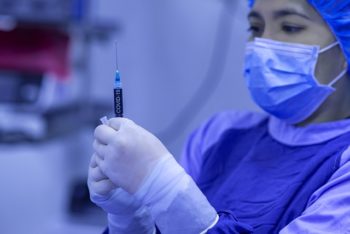 The small batch (only fourteen hundreds doses), has arrived in Israel before the vaccine was authorized by the U.S. Food and Drugs Administration. Prime Minister Benjamin Netanyahu and Health Minister Yuli Edelstein were at the airport to receive the shipment of vaccines. אֲנִי מַאֲמִין בַּחִסּוּן הַזֶּה (I believe in this vaccine), said Netanyahu standing in front of the charter flight carrying the doses.

The clinical trial periods of coronavirus vaccines are being greatly shortened to enable rapid development of a vaccine. This produced fear among some people that researchers have skimped on safety. A survey, conducted in September, has found that nearly a quarter of Israelis would not take a coronavirus vaccine if it was approved for use. According to another survey published in November, over half of Israelis do not want to be among the first people to be given the vaccine when the immunization shots eventually become available.

Every couple of decades, a polio/smallpox/measles outbreak promotes a public discussion in Israel about legislation of mandatory vaccinations. An obligation in legislation to get vaccinated constitutes a fatal violation of the fundamental rights and freedoms of the individual. To this day, Israel has refrained from requiring any vaccines in legislation. Even without a law of this kind the immunization rate in Israel is one of the highest in the world in routine vaccines.

But the COVID situation is not routine. Last November, Israeli media was ablaze about the prospect of the government making it mandatory to get vaccinated against the pandemic. A vaccination obligation must be examined in legislation, said several professionals in the Health Ministry. The Health Ministry director-general himself said: הָיִיתִי רוֹצֶה לְקַדֵּם חוֺק כָּזֶה וּלְחַיֵּיב אֲנָשִׁים שֶׁאֵין סַכָּנָה רְפוּאִית לְחַסְנָם (I would like to push forward a law like this and to require people for whom there isn’t a health risk to get vaccinated). The Health Minister, though, renounced such an obligation.

A couple of days after the vaccinations arrived in Israel, they were granted an emergency use authorization by the FDA. אֲנִי רוֹצֶה שֶׁאֶזְרְחֵי יִשְׂרָאֵל יִתְחַסְּנוּ (I want the citizens of Israel to be vaccinated), said Netanyahu. In attempt to encourage them, he declared to be the first citizen to get vaccinated. Ten days after Netanyahu welcomed the batch of doses in airport, he sat bared arm in front of the cameras and get vaccinated:

A week later and about 280,000 Israelis got vaccinated. Nine days into the vaccines campaign, the number of Israelis vaccinated against the coronavirus outnumbered the number of those who have been infected with the virus since the beginning of the outbreak. Some 495,000 Israelis were vaccinated as of December 28, while 407,285 Israelis had been confirmed as infected since the beginning of the outbreak. לַמְרוֹת קְבוּצָה קְטַנָּה שֶׁל מִתְנַגְּדֵי חִסּוּנׅים אֲנַחְנוּ בַּבָּסִיס חֶבְרָה שֶׁמַּאֲמִינָה בְּחִסּוּנׅים (despite a small group of vaccine opponents, we are at the bottom a society that believes in vaccines), said a professor from Ben-Gurion University.

On the first day of 2021, Netanyahu in a visit to immunization center marked what he said was the millionth Israeli to receive a vaccine. Which means Israel has vaccinated more than a tenth of its population, in two weeks.

The root of the verb to vaccinate לְחַסֵּן is ח-ס-נ, and it belongs to binyan pi’el. It’s conjugated as follows:

The government aims to vaccinate the majority of the population by the summer.

The doctor vaccinated the child.

First, we vaccine the medical staff and the at-risk population.

The root of the verb to get vaccinated לְהִתְחַסֵּן is ח-ס-נ, and it belongs to binyan hitpa’el. It’s conjugated as follows:

It’s very important to get vaccinated.

Have you been vaccinated yet?

I got vaccinated yesterday.