Reporting the Russo-Ukrainian Crisis in Hebrew Posted by Ayana on Mar 1, 2022 in News 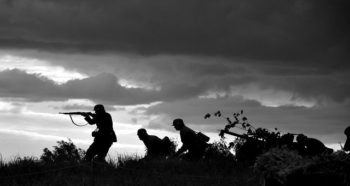 Photo by Rozbooy from Pixabay.com, CCO

In the late 80’s, after the post-Soviet Russian government opened the borders of the former Soviet Union, many Jews emigrated. More than one million came to Israel since then from the different countries of the former Soviet Union. With two out of every three new immigrants to Israel coming from Russia or the Ukraine, they are forming the majority of the immigrants. They integrate into the Israeli society, making Russian the fourth most spoken language in Israel.

In January 2022, on the backdrop of growing tension in the Russian-Ukrainian border, Israel was already preparing for the possibility of new thousands of immigrants from the Jewish Ukrainian community. The speculations over a Russian invasion were described by reporters with fears. Many used the Hebrew phrases: קוֹלוֹת מִלְחָמָה (sounds of war) and רוּחוֹת מִלְחָמָה (winds of war). Although the Russo-Ukrainian War is an ongoing war since 2014, the last escalation was described severely and the noun מִלְחָמָה (pronounced as mil-ha-ma) appears daily in Hebrew headlines:

On the brink of war in Europe

Threats of war: will Russia invade?

Fear of war: a wave of immigration is expected in Israel

Under this war alert (כּוֹנְנוּת מִלְחָמָה) many Israelis returned home from Ukraine. Some earlier than planned, some for a short period until things will hopefully calm down. Many of those returning in the next video, who were interviewed in the airport, mentioned the stress of the Israelis compared to the tranquility of the locals.

On 24 February 2022, Russia invaded Ukraine. The doubts and question marks disappeared from the headlines, which became short and firm: מִלְחָמָה בְּאֵירוֹפָּה (war in Europe) or הַפְּלִישָׁה לְאוּקְרָאִינָה (invasion of Ukraine). The Hebrew verb לִפְלֹושׁ means to invade. It belongs to binyan pa’al, and it’s conjugated as follows:

On that day, the verb appears consistently on the news:

Putin has invaded the neighboring country

The root of the verb לִפְלֹושׁ is פ-ל-ש. When inserted into a noun pattern it creates the word פְּלִישָׁה (invasion, pronounced as pe-li-sha). On February 24 the fears were realized, and the Ukrainian president declared: הֵם פָּלְשׁוּ לַשֶּׁטַח שֶׁלָּנוּ (they invaded our territory). On the second day of invasion Kiev streets were empty, as the Israeli reporter in the capital described: