To Fly Abroad in Hebrew Posted by Ayana on Jan 24, 2022 in Travel & Geography 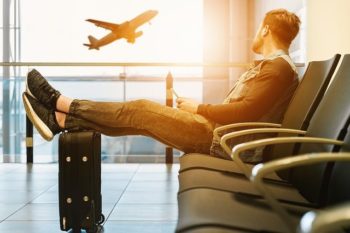 Photo by JESHOOTS-com from Pixabay, CCO

The Hebrew phrase חוּץ-לָאָרֶץ (pronounced as hutz-la-a-retz) literally means outside of the country. חוּץ (hutz) means outside; אֶרֶץ (e-retz) means country. It is the Hebrew equivalent for abroad, overseas. It describes any place that is not Israel or any specific country the speaker refers to. It is such a common phrase that although it’s composed of two nouns and particles, it has been referred to as a place name, even though it can refer to any continent or country. For example:

I have never been abroad.

A soldier will not leave the country without a permit.

Ongoing updates about overseas can be found on the news website.

Anyone born abroad to Israeli citizens may apply for citizenship.

The phrase חוּץ-לָאָרֶץ is an ancient phrase that was created in Hebrew way back in the rabbinic period (1st century CE-600 CE). The distinction between the Land of Israel and other countries is of great ideological importance. Many Jewish laws and customs are dependent on the land of Israel. Some laws and customs apply only in the land of Israel, some are not obligated outside the Land; others are still observed, but differently. Jewish scholars devoted many discussions about the various aspects of the sanctity of the Land, and the effect of it on the observance of the different Jewish commandments.

In the scholars’ texts the phrase appear sometimes in abbreviation: חוּ”ל. This abbreviation (pronounced as hul) became a word in itself that, due to its abbreviation, is even more common in daily spoken language. For example:

I bought the shoes abroad.

It is important for me to keep up to date with what is happening abroad.

We came back from abroad only yesterday.

My uncle lives abroad and comes to visit in the summer.

Last month I sent a package overseas, only yesterday it arrived.

Israelis love to fly abroad. Bar Mitzvah, Bat Mitzvah, before the army, after the army, graduation, holidays, and summer vacation – any opportunity to fly is a good opportunity. But in the last couple of years, due to COVID-19, Israelis fly less, and they are not the only ones. The number of foreign tourists visiting Israel has decreased since the beginning of the pandemic. Israeli cities try to attract local tourists, advertising themselves as a good substitute for abroad. Netanya, for example, published a video with the slogan: חוּ”ל זֶה כָּאן (overseas it’s here). Tel-Aviv also published a video with the slogan: לֺא צָרִיךְ לָטוּס לְחוּ”ל כְּדֵי לְהַרְגּׅישׁ חוּ”ל (no need to fly abroad to feel abroad).

There are many verbs to use when referring to חוּץ-לָאָרֶץ:

לְטַיֵּל (to travel), לְבַקֵּר (to visit), and so on. The most common one is לָטוּס (to fly). The root of the verb to fly is ט–ו–ס, and it belongs to binyan pa’al. It’s conjugated as follows: