Israel Population at Nearly 9.5 Million Posted by Ayana on Jan 10, 2022 in Environment, Grammar 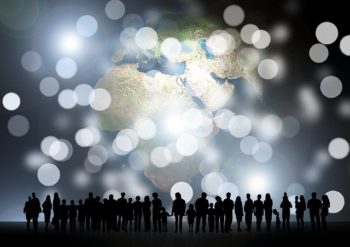 Photo by Geralt from Pixabay, CCO

One day before 2021 ended and 2022 began, the Israeli Central Bureau of Statistics (הַלִּשְׁכָּה הַמֶּרְכָּזִית לִסְטָטִיסְטִיקָה) published, as usual, the updated data of Israel’s population.

The Hebrew name of the Israeli Central Bureau of Statistics is הַלִּשְׁכָּה הַמֶּרְכָּזִית לִסְטָטִיסְטִיקָה. The Hebrew noun for bureau is לׅשְׁכָּה (pronounced as lish-ka). לׅשְׁכָּה bears two meanings: one of an actual room – an office, usually a big one that belongs to a senior officer. The other meaning is an organization, an authority, as in the above name of the Central Bureau of Statistics. The noun לׅשְׁכָּה is feminine, as indicated from its ending with the letter ה. In its construct form the letter ת replaces the letter ה, and the pronunciation changes to לׅשְׁכַּת (lish-kat): instead of ending with the sound a, it ends with at. For example:

The discussion in the bureau has begun, the minister has not yet joined.

The Institute of Certified Public Accountants in Israel was founded in 1931.

The director was promoted and moved to the new bureau.

The Federation of Israeli Chambers of Commerce is the largest business and employers’ organization in Israel.

The Central Bureau of Statistics – usually called in abbreviation הלמ”ס, the CBS – was founded several months after the establishment of the State of Israel. It cooperates with State offices and performs statistical activities and projects regarding the State and its population, in the fields of health, wellbeing, education, economy etc. Every year it publishes the current data about Israel population.

A population is a distinct group of individuals.

The growth rate of the earth’s population is steadily declining.

It is important to identify the needs of the population.

The penguin population in parts of Antarctica has shrunk by 75%.

Most of the headlines reporting the numbers were informative. The headline from the Ma’arive newspaper, for example says:

The data are revealed: by how much did the population of Israel increase in 2021?

Some headlines were more positive. The Ynet website, for example, announced: הִתְעַצְּמוּת כָּחֹל-לָבָן (blue and white intensification). But some reporters were negative. An article in The Marker, for example, complains about the overload of a growing population, and the failure of Israel to deal with it: traffic jams, housing shortages, long queues for health system services, and so on.