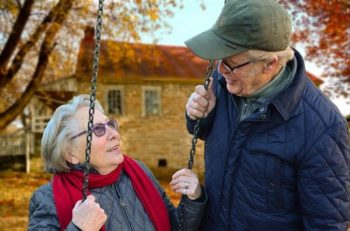 Photo by Huskyherz from Pixabay, CCO

The Hebrew word for grandfather is סַבָּא, pronounced as sa-ba.

The Hebrew word for grandmother is סָבְתָא, pronounced as sav-ta.

The original Hebrew words are very similar in pronunciation as well: סָב (sav) for grandfather and סָבָה (sa-va) for grandmother. They are, however, less common than their Aramaic antonyms, and rarely used in Israel. So rare that if you’ll use them in a conversation, most listeners will probably correct you to say סַבָּא or סָבְתָא. I must admit that I never used the original Hebrew words myself or heard someone use them. I will therefore refer in this post to the common words used in Hebrew for grandparents.

The words סַבָּא and סָבְתָא can refer either to a specific person, someone’s own grandparent, or to any person who has grandchildren and bears the title grandparent. For example:

An involved grandfather has a great impact on his grandchildren.

His grandfather greatly influenced him.

Being a young grandmother is fun.

My grandmother is quite young.

As in English, both Hebrew nouns don’t distinguish between the two sides of the family. The noun סַבָּא can refer to the father’s father, as well as to the mother’s father. The same is true with the Hebrew noun for grandma. The noun סָבְתָא can refer to the father’s mother, as well as to the mother’s mother. The only way to figure this out is by the context, or if the speaker explicitly tells it.

My grandmother is a very independent woman.

My grandma raised three children by herself: my father and his two sisters.

Grandpa, how are you feeling?

Grandpa, how was mom as a child?

Both nouns decline to plural in accordance to their grammatical gender without exception:

Both my grandmothers live nearby.

A new survey reveals that 70% of grandfathers help raise their grandchildren.

There is no one term in Hebrew for grandfather and grandmother together. There is no Hebrew equivalent for the word grandparent or grandparents. Some use the plural form of grandfather – סָבִים when referring to both, but most mention both the grandpa and the grandma. For example:

My grandpa and grandma came to visit.

All the grandmothers and grandfathers are welcome to the party.