Christmas in India Posted by Nicole Herbert Dean on Dec 7, 2021 in Culture, Holidays 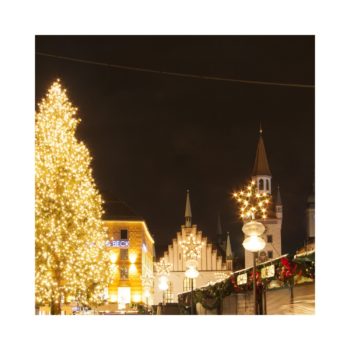 People tend to forget that the Christian Apostle Thomas went to India to spread the Christian message संदेश. The Indians killed him for his efforts. But, his message remained स्थिर रहा and is still thriving today. Christianity spread throughout India and there are stories of many devout धार्मिक Christians martyred for their faith, even today.

Today, Christians make up 2.5 percent of the Indian population आबादी. This includes both Catholics and Protestant groups, the Mar Thoma (Saint Thomas in Aramaic) – including descendants वंशज of Thomas’ disciples.

The British, Portuguese, Dutch and Greeks also brought Christian culture into India, leaving behind traditions and recipes विधि. Of course, no matter the religion, Indians love to celebrate occasions and often all faiths धर्म join in.

A walk in the neighborhood

Therefore if one were to walk down the street in a predominantly मुख्य रूप से Christian or Catholic neighborhood, one can see bright icicle lights hanging from roofs छत or balconies बालकनी and paper-lit stars from the porches बरामदा.

It is also quite common to see large nativity जन्म displays at the end of streets in predominantly Catholic towns like Bandra, Mumbai.

Before the Christmas break, Catholic-run schools would host nativity plays. Weeks of practice and a flurry of costume पोशाक rehearsals and the day dawns right before the end of the term.  Local choirs also get together and go down streets caroling at night. People invite the carolers inside to have hot chocolate and Christmas sweets. Yes, it is a big deal for Indian Christians.

In some communities a sweet making tradition arose from the multinational बहुराष्ट्रीय conquests –  the Kuswar.

The Portuguese and the British especially introduced specific sweets like the plum cake, figgy pudding and other coconut based recipes. Today, the Goans, Mangloreans and East Indians create wonderful delicacies विनम्रता from the beginning of December. Cousins and large families gather together to make these delicacies. They sit around the kitchen table and trading stories कहानी while trying out the recipes handed down by their grandparents.

What happens on the Day?

On Christmas eve it is customary प्रथागत for people to go to church. Everyone gets dressed in their finery सजधज and goes early to reserve a seat to hear the carols. After the midnight mass or service, people usually go over to friends for fruitcake and wine.

On Christmas day, people greet one another in different languages. In Hindi it is ‘Bade Din Ki Mubarak’. Mother’s send children scurrying to the neighbors पड़ोसी with sweets. Everyone waits for the bada khanna or big dinner in the afternoon.  On the table are certain traditional परंपरागत dishes such as pork vindaloo, sorpotel, pulao and beef rolls.

In the evening, people attend the large Christmas dances or balls around the city. People dance to  great bands which play all the favorite Western classics from the Beatles, Elvis etc

In India, Christmas is more of an event made for gathering, eating and merriment. The focus is not so much on gift giving. However, slowly the west’s ways are intruding into the simplicity of these traditions.