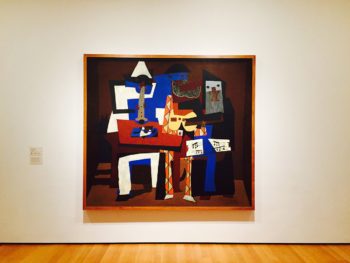 I remember looking at a piece of art कला in Mumbai. This art was extraordinary in the fact that it did not look like the ancient Mughal paintings one often sees in India.

This was a time when radical मौलिक artists were slowly emerging in the big cities. One such artist was M.F. Husain – full name, Maqbool F. Husain. A tall gangly man, with long shaggy hair and beard दाढ़ी that turned white quite early. He walked barefoot everywhere. They called him India’s Barefoot Picasso. If institutions संस्थान required shoes, he wore socks as a compromise.

Husain is quite simple. He paints sitting on the floor. The canvas is propped against the wall. No easel चित्रफलक. Pots of paint spread around him. He holds a long brush in his hand and paints in long strokes.

Horses, people, mythological पौराणिक figures, figures of women. His style is sort of cubist with very colorful and vibrant imagery. He captured scenes दृश्यों with a humorous and vibrant narrative वर्णन.

Many of his paintings were of Indian mythology. Some of which garnered the wrath of India’s Hindus quite recently.

But his style is simple. No fancy studio with high-tech lighting and easels. This is indicative of just how simple this man is. But his art, his art sells for millions.

Husain was born in a small town called Pandarpur in Maharastra, India. He spent much of his youth in the cities of Indore and Baruch. He became interested in art while studying Arabic calligraphy सुलेख.

As a child, he also liked sketching and painting horses. He even inserted himself into some of his paintings portraying himself sketching as a child.

The artist lost his mother at a very early age. This started a lifelong जीवन भर series of art depicting women as a homage to her in his art. People say that he often drew faceless women because he could not remember his mother’s face.

Such talent did not come from art school, however. Husain did not go to art school due to lack of funds फंड. However, he learned techniques on the job. He moved to Mumbai and started working with a prominent प्रमुख Bollywood billboard painter for around 5 years.

From there he went on to work as a nursery furniture designer, crafting and painting adorable kids’ furniture pieces.

From Painter to FilmMaker

Husain was also interested in filmmaking. He submitted a film to the Berlin International Film Festival in 1967. Later, he made Gaja Gamini with his muse, Madhuri Dixit, and Meenaxi with the film star Tabu.

India bestowed 3 of their highest civilian awards on Husain.  – the Padma Shri, Padma Vibushan, and the Padma Bhushan.

A life of exile

As with all good art, it must evoke a reaction. And so Husain’s art did get him into trouble. Many death threats and defamation cases later, he decided to go into self-exile. In the latter part of his life, he divided his time between Doha, Qatar, and London.

Husain passed away from a heart attack on June 9, 2011, in London and is buried at the Brookwood Cemetery in London.