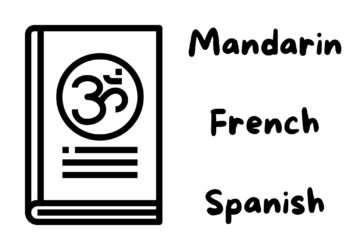 Ask any student छात्र in Delhi, what language they want to learn and they will answer, Chinese, French or Spanish. So, why don’t school kids choose चुनें the ‘mother‘ of all languages so to speak?

From the gypsies of the Thar desert to the African immigrants आप्रवासी of the Deccan Plateau, many languages in India originate from Sanskrit. But not all. Hindi, Bengali and Marathi stem from Sanskrit. Sanskrit was passed down through generations पीढ़ी orally until someone thought of putting it down in writing. To keep this language alive and to preserve its traditions, people write books and poems कविता , epics महाकाव्य and tomes. But, today you will hear only the Hindu priests पुजारी and some devotees speak it.

So why the resistance to learn a classical historic language? What is the psychology मनोविज्ञान behind choosing one language and not the other? The answer lies in two areas: Politics राजनीति and religion धर्म.

The right wing government of India at present is pushing the agenda to continue the tradition of learning Sanskrit in schools. Uttarakand is the only state that recognizes Sanskrit as its official language. This may be due in part to the various temples and Hindu holy places in that state. In Delhi, there are schools that have Sanskrit week and teach the old Vedic language as well as Vedic math.

However, for the Muslim whose holy book, the Quran is in Arabic, learning Sanskrit is not as important as learning Arabic. The south Indian whose family speaks at least one of the 26 Dravidian origin languages, Sanskrit is not only not important but learning it is met with resistance प्रतिरोध. They would rather learn English. But, more about that later. This is due to the fact that they consider the Dravidian languages rooted in their religion and culture, to be ancient and well worth preserving.

Then there are those, especially from linguistic and religious minorities, that will not learn Sanskrit. Why?  Because,  they believe that the current government is intent on pushing a right wing Hindu nationalist राष्ट्रवादी agenda by implementing Sanskrit in schools.

Kids today want to learn a world language more than a traditional ancient language like Sanskrit because they view themselves as players on the global stage. A student aspiring to go to Harvard or Yale, is more likely to learn Chinese, Spanish or French as this is considered to be upwardly mobile. It will help him or her scale up the corporate निगमित ladder easily.

What use is Sanskrit except to recite mantras before God, is their thinking. Preserving the ancient प्राचीन language and its accompanying culture is far from their minds at the moment. Interestingly, the government previously had not even set up Hindi or English as the official languages of India.

Learning French, Japanese, Arabic and German is fruitful since they translate into career आजीविका and travel opportunities for Indians who want to immigrate.  English has the ‘cool’ factor on the street. Even Hindi is evolving at a rapid rate throwing many words into the obsolete pile.

So where does Sanskrit really stand? The author believes that people really interested in keeping languages alive will learn it. They would also be the best ones to document it and keep it intact in its purity.