What is the Manasollasa? Posted by Nicole Herbert Dean on Oct 12, 2021 in Food 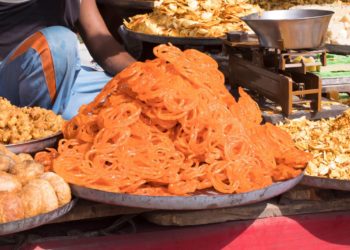 Have you ever wondered what medieval मध्ययुगीन kings ate? Some movies depict large abundantly filled tables with fruit, goblets प्याला, massive roasted meat भुना हुआ मांस, etc. But seriously, what did they eat?

During the research on Malik Ambar’s life, I thought about what people in the Deccan Plateau दक्कन का पठार, at that time ate. My search led me down a rabbit hole of discovery!

Where is the Deccan Plateau?

The Deccan Plateau was the backdrop to the story of Malik Ambar. This plateau is situated about halfway down the middle to the western coastline समुद्र तट of India. It mainly encompasses the states of Maharashtra and Karnata. The Chalukya dynasty ruled over a large part of the Indian peninsula प्रायद्वीप. The capital was in Kalyani and its king was King Bhulokamalla Someshvara III. This king was intent on providing a lasting legacy विरासत to his subjects and the generations after him.

Manasollasa means, ‘happiness of mind’.  Scribes wrote this ancient text प्राचीन पाठ in the courts of King Someshvara III around the 12 century.  This king was a poet and not a warrior, like his predecessors. He encouraged literature and poetry and thanks to him we have this incredible text.  The Manasollasa is essentially a guide of over 100 chapters on all things kingly. The topics range from where to live during the four seasons, to how to serve a king.

It is also the oldest known textbook of Indian cooking and recipes, with over 20 chapters devoted solely to cuisineभोजन.

Poems usually describe life or romance प्रणय. But, imagine learning how to cook something solely केवल by reading poetry? Well, this is what the Manasollasa is – a text written almost entirely in verse. According to food historian, Mary Ellen Snodgrass, this book predates the medieval cookbooks रसोई की किताब found in Europe by a century. This makes it possibly the oldest cookbook in the world. It is the first text that details cooking instructions and ingredients. Currently, people use a modified संशोधित version of many of the recipes. For example, iddrikas are similar to idlis which are a staple South Indian dish. Gharika which is a sweet fried cake is similar to jalebis which grace many Indian dessert tables.

It looks like the practice of vastu which is similar to Feng Shui, originated during this time too. The Manasollasa outlines the direction in which the king was supposed to sit and face. Facing east पूर्व secures a long life, while west पश्चिम, wealth. Facing northउत्तर meant good health and facing south दक्षिण guaranteed a comfortable life.

As with many ancient texts such as the Torah, the instructions carry much detail. Every aspect of life, how to eat, what to eat, and where to sit leaves no one in doubt.  It seems that these practices brought about some order and predictability to life in those days.

Looking back to going forward

It is imperative such ancient texts like the Manasollasa be preserved in order to provide future generations a frame of reference. By looking back at our past and understanding practices in ancient cultures and society, we have a blueprint to go forward. This enables us to improve our diet and lifestyle. It also helps us not make the same mistakes while going forward.