In part 1 of this blog series on gender in Hindi, I discussed gender as it relates to each word’s source language, with the language of focus being Sanskrit. In this post, I’ll talk about a few more source languages and how they dictate gender: Persian, Arabic and English! 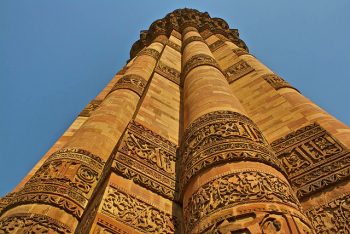 Image by Sakeeb Sabakka on Flickr; the Qutub Minar, a beautiful minaret from the time of the Delhi Sultanate engraved with Arabic calligraphy

Persian and Arabic words often do not follow the pattern of indigenous Hindi words that end in -aa (आ)=masculine and -i (इ) and -ii (ई)=feminine as these two languages are vastly different from a lot of the languages that are more indigenous to the subcontinent, such as Sanskrit and Prakrit. One helpful tip for these words is to memorize them on a case by case basis, making sure to use flashcards that employ each word in a sentence and state the word’s gender.

The case of gendering English words in Hindi is, as you would expect, a bit tricky as English itself does not have a system of gender and the gendering of such words in Hindi follows sometimes contradictory and seemingly nonexistent rules. Because this is generally the case, it is best to memorize the genders of such words on a case by case basis as well. One rule of thumb is that English words generally adopt the gender of their Hindi equivalents. For example,

*रोड़/ror is something you will hear in small cities or villages amongst people who know some English but are not fluent in the language; it is an Indianized pronunciation of “road” that you will not hear amongst those educated primarily in the English language. This word is considered feminine as the equivalent word in Hindi, सड़क/sarak, is also feminine. टायर/taayar (tire) is considered masculine, but there is no ready Hindi equivalent for it. Lastly, पंचर/panchar (puncture, masc. noun) is an Indianized pronunciation of the English word; the Hindi semi-equivalent of this word is simply “hole” or छेद/cched (also masc. noun). 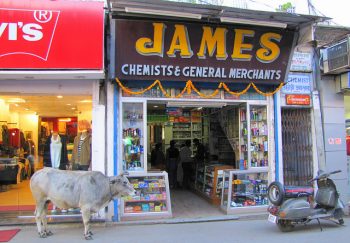 *Doctor is often considered masculine in Hindi as its Sanskritic equivalent चिकित्सक/chikitsak is also masculine. Additionally, “taxi” (टैक्सी) as well as many other forms of transportation (ट्रेन/train, बस/bus, कार/car or गाड़ी/gari/also car but not ट्रक/truck, which is masculine) is feminine, but there is no ready equivalent for taxi in Hindi.

Other common English words in Hindi include the following: 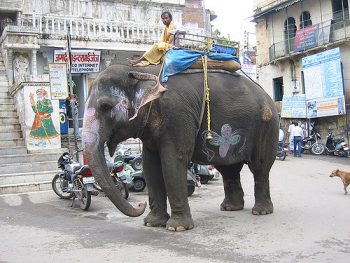 Last but not least…

Another important point is that you should always keep an eye out for EXCEPTION WORDS in the Hindi language because they are commonly used, yet appear to flout normative Hindi gender conventions: