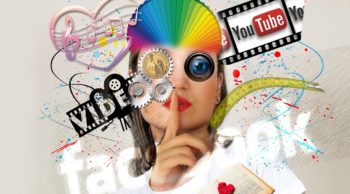 In our last blog post, we mentioned the Tapori language spoken by the lower classes of Mumbai. In this blog, we will turn our attention to a sophisticated form of Hindi spoken by the upper classes. It is a mixture of English and Hindi.

Social media influencers have taken लिया है to YouTube in droves तादाद in India. Educated young Indians are not far दूर नहीं हैं behind the West in their efforts प्रयासों.  They want to bring the best of India भारत का सबसे अच्छा to the world. They provide content सामग्री in English as well as in Hindi.

Many of the channels are in Hindi. However, the most interesting रोचक and popular लोकप्रिय channels are the ones that use both दोनों languages and code switch easily आसानी between Hindi and English. This is the ‘real’ Hindi. The younger generation especially विशेष अधिक among the young urban शहरी middle class speak this kind of ‘code’.

Curly Tales and its Founder

My first discovery खोज of an Indian influencer was the YouTube channel Curly Tales managed by a lady called Kamiya Jani. She writes लिखता, shoots and provides content pertaining संबंधित to travel यात्रा, food खाद्य पदार्थ and lifestyle जीवन-शैली. She is one among the scores of corporate runaways turned digital nomads खानाबदोश. You can view her story here.

As she tells her story, you will notice how easily she switches between English and Hindi. For example, she says, “2016 I quit my job, I was working as a news anchor, in a business news channel.” Then she goes on to say, “उससे पहले मैं बहुत ही (before that I was doing a lot of ) anchoring करती थी, रिपोरटर थी (was a reporter), producer थी.” Notice how some of the nouns are in English mid-phrase.

She continues, “So I used to do a lot of jobs, a lot of these things.” She carries on, “Writing, producing assisting सहायता my cameramen to get the right सही shots, assisting the anchor for the show. Then she switches mid-sentence to Hindi, “तो काफी कुछ किया है और उसके बाद (I did a lot/enough and after that). And finally switches back to English, “I think in 2016 I quit my job.” Mind-boggling to the untrained audience.

What is amazing अतिविस्‍मयकारी is that her audience भेंट is quite at ease काफी आराम से listening to her switch between के बीच and in the middle बीच में of sentences. I would imagine if they did not understand समझना some words they would understand the context.

Any purist listening शुद्धतावादी श्रवण to this would cringe. However, modern नवीन India not only accepts स्वीकार but approves मंजूरी दी of this kind of speech. In fact, if you speak pure Hindi, people will think you are माना जाता old fashioned. People will also think you are educated in vernacular जनभाषा Hindi medium schools. These are apparently not as sophisticated जटिल/ परिष्कृत as their English counterparts समकक्षों. You will also stick out like a sore thumb and even Hindi speakers will run away from you!

As we go back to Curly Tales and watch the rest of the video we notice something unique. What is interesting is the people watching देख Curly Tales, also write in the combination of Hindi and English in the comments section भाग. The conversation carries on effortlessly. Everyone seems to be having fun and participating. They are also blissfully unaware of how complicated this code-switching is to the onlooker.