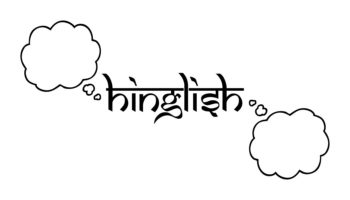 As we tackle the fast-paced evolution of languages all over the world due to the internet. We will take a look at the ever-evolving speech of the Hindi language in India.

In our last post, we discussed social media’s use of a mixture of Hindi and English in speech.

The combination संबंध of Hindi and English is very common सामान्य in India among the educated class. This code-switching is popular and has several characteristics लक्षण. Bollywood embraced it gladly and so have their audience.

Who speaks this language

Bollywood is a major influencer of this trend. Actor Rajesh Khanna said the famous line, “Pushpa, I hate tears.” in the blockbuster, Amar Prem. Lately, actor Salman Khan told his female lady love, “दोस्ती का एक उसूल हैं (there is a principle in friendship), madam: no sorry, no thank you” in the movie, Maine Pyar Kiya.

There are websites devoted to quoting these lines from famous stars. Youngsters love to use these lines in everyday conversation displaying knowledge of not only the latest movies but also the latest trends in speaking English. The evolving trend is to speak a watered-down version of Hindi. One way to keep Hindi intact is to continue teaching it to future generations in its purest form.