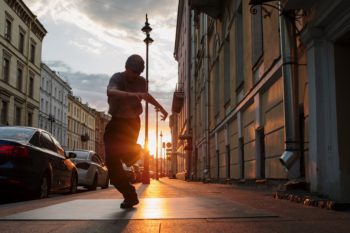 Nalasopara, Mumbai is a little slice टुकड़ा of American rap culture in India.  Nalasopara is located about 30 miles north उत्तर of Mumbai city. Easily accessible by train रेल गाडी it is a short half-hour ride. The price per square foot also makes it highly desirable among migrant प्रवासी laborers who work in the city.

Walk down a graffiti-lined street and you will see young guys dancing नृत्य to upbeat music. It is known as a dance hub. But, today it is fast becoming known as the hip hop hub. Even the graffiti looks western.

Youth clad in jeans and tees with the typical baseball hat, hang out in groups and practice their moves. They wear oversized बड़े shirts whose main color is black with large lettering, paired with baggy pants or jeans and bottomed off with sneakers.

Even though you are in the heart of India, the style is exactly the same as we see here in the United States of America. The rappers’ influences प्रभाव come from 30 miles uptown- the commercial capital and fashion hub of India – Mumbai. In fact, if you did not hear the music and the words you would think you were in America.

The sounds are similar, the beat familiar, but the words are not understandable at first – unless you know Hindi or Marathi.  The songs are mostly sung in colloquial Hindi and Marathi. The topics are usually centered around life in Nalasopara, politics, and social reform. There are beatboxers, who probably watched countless Youtube videos to practice the art form.

A well-known group, Bombay Lokal, is one of the top influencers of this art form. The group picked the name Lokal to reflect their lifestyle of traveling Mumbai’s famous local trains. This group is Mumbai’s first collective of this art form. They are a group of young skilled artists and musicians who pride themselves on being ‘conscious rappers.’ They have interesting names like Shaikhspeare, D-Cypher, and Beat Raw.

Shaikhspeare is the founder of the group. He saw a lack of hip hop, rap, and the associated culture in Mumbai and so he envisioned अनुरूप a group of like-minded lovers of all things hip-hop. He recruited talent in graffiti, beatbox, songwriting to form the collective सामूहिक. They travel and work with a whole support group of b-boys, graffiti artists, and crew.

Their focus is socio-political reform सुधार and they use hip hop as the means to spread the word and influence. This kind of group is also known as the gully boys – named after a 2019 Bollywood film, Gully Boy.

Besides, racism, capitalism, and other common topics they also create songs protesting casteism, which is unique to India and also the patriarchy पितृसत्तात्मकता. There is an artist, MCKash, yes, he has an Irish-sounding name, who also talks about the issues of Kashmir.  They know that this is the most appealing and yet safe, way to attract the youth to understand these social issues सामाजिक मुद्दे.

Today, their objective is to mentor and train other hip hop artists to spread the culture and with it the message of protest against prevailing issues.