What’s Bollywood Without a Grand Wedding? Posted by Rachael on Dec 6, 2018 in Hindi Language

And there it is – the million dollar question. With this blog, we’ll get a bit frivolous and discuss one of the most publicized weddings (शादी/shaadi, विवाह/vivaah) the Bollyworld has witnessed in recent memory (besides that of Priyanka Chopra and Nick Jonas, of course): that of Ranveer Singh and Deepika Padukone. 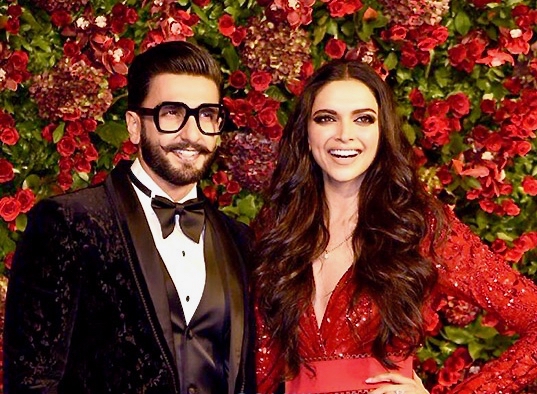 Deepika and Ranveer at their Mumbai Wedding reception; image by Bollywood Hungama on Wikimedia Commons, licensed under CC BY 3.0.

A classic Bollywood film often begins with seemingly star-crossed lovers (प्रेमी/premi, technically प्रेमिका/premikaa, refers to a female lover)  and ends happily with a wedding, uniting two families (परिवार/parivaar, ख़ानदान/khaandaan) that were, perhaps, at odds with one another earlier in the film. When not watching such films, I would sometimes read Hindi tabloids about the stars (my favorite being स्टार डस्ट/Stardust) whiling living in India as a way to practice my Hindi and keep up with my favorite Bollywood actors (अभिनेता/abhinetaa) and actresses (अभिनेत्री/abhinetri) at the same time.

As many know in the Bollywood fan (प्रशंसक/prashansak=fan) world, Deepika Padukone (दीपिका पादुकोण) and Ranveer Singh (रणवीर सिंह) had been dating for what seems like a while now, having starred in multiple films together where they played each others’ love interests, such as पद्मावत (Padmavat), बाजीराव मस्तानी (Bajirao Mastani) and गोलियों की रास लीला, राम लीला (Goliyon ki Raas Leelaa/Raam Leelaa). It was during the filming of the latter that, as the pair’s celebrity friends hint, the two began to fall in love (प्यार में पड़ जाना/pyaar me par jaanaa or x को प्यार हो गया/x ko pyaar ho gayaa). And, it is no mere coincidence that the three movies I just listed were directed by the one and only Sanjay Leela Bhansali – it is clear while watching the films that Bhansali had a “bit” of an obsession with the pair (जोड़ी/jori), most likely because of their sultry on-screen presence and chemistry that added further fire to the flames of his epic, visually stunning films. 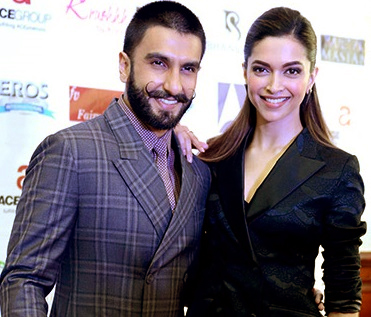 Deepika and Ranveer at a press conference for their film, Bajirao Mastani, in Delhi. Image by Bollywood Hungama on Wikimedia Commons, licensed under CC BY 3.0.

Although reticent about her personal life, Padukone previously dated Ranbir Kapoor (रणबीर कपूर), who was her co-star in movies like बचना ऐ हसीनो (Bachna ae Haseeno) and यह जवानी है दीवानी (Yah Jawaani Hai Deewani). After the couple broke up, most likely due to Ranbir’s betrayal of Padukone, they rekindled their friendship (दोस्ती/dostee) while filming the latter movie. After working with Ranveer Singh on several films, however, Deepika became enamored (मन मोह लेना/man moh lenaa, literally to captivate one’s soul) of her co-star (the feeling was mutual) and the two were recently wed in a traditional (पारम्परिक/paaramparik) Konkani (Padukone is originally from Bangalore) and Sindhi (Ranveer has Sindhi roots) wedding ceremony on the banks of the picturesque Lake Como in northern Italy.

Subsequently, the जोड़ी returned to India, where they hosted two receptions, the most recent one being at Mumbai’s Grand Hyatt Hotel and organized by Ranveer’s parents (माता-पिता/maataa pitaa or, less formally, माँ-बाप/maa-baap). Previously, the two hosted their first reception in Bangalore at the Leela Palace Hotel, which was organized by Padukone’s mother and father. In October, when the couple originally announced (ऐलान करना/ailaan karnaa) the date of their wedding, they also shared their wedding invitations (शादी का निमंत्रण/shaadi kaa nimantran) on social media, one in Hindi and the other in English, which is a bit unusual considering that most high-profile Bollywood stars speak fluent English and oftentimes prefer to converse and read in English. Practice your Hindi a bit by trying to read the Hindi version of the wedding invitation without peeking at the English.

A stunning vista of Lake Como, in northern Italy, the site of Deepika and Ranveer’s wedding ceremony. Image by Diego Delso on Wikimedia Commons, licensed under CC BY-SA 4.0.