Getting understood in Iceland, part 1. Posted by hulda on Jan 9, 2013 in Icelandic culture, Icelandic grammar 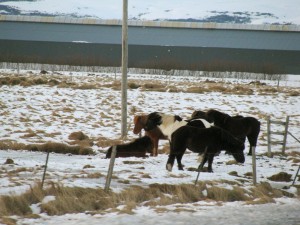 A typical problem, when trying to use Icelandic to speak with the locals, is that for some reason they look at you quizzically and go “ha”* and you end up repeating yourself over and over again. Yet in the classroom or when talking with your teachers you never run into this same problem. Why is that?

It’s because you’re mispronouncing. Other foreigners are in the same position with you – they all have their accent that can come in the way of pronouncing correctly – and your language teachers have a long experience of listening to various foreigners use the language. In short, everyone else except for the usual Icelander is already trained to listen to you. The good news is that the problem is easy to correct. Just pay attention to a couple of crucial points while you speak.

Most importantly, do not try to speak as fast as the locals. It’s tempting because it gives a chance of avoiding too difficult sound clusters and Icelanders themselves mutter, mumble, and cut every word into bite-sized syllables anyway, don’t they? But unlike them, you don’t know what those important bits are that absolutely have to be included. Besides you already have an accent which may make it challenging for the locals to understand you, so it’s best to not make it even harder for them. 😉

However, Icelanders will understand you sooner or later if you keep on trying, and this is a point I wish to stress: your mistakes don’t really matter. You won’t be ridiculed because of them, most likely they’ll be politely ignored. In fact, making mistakes will help you rather than harm you. They should be considered a very important part of learning any new language, getting over your initial fear of using it. When it comes to pronunciation it feels worse to fear the mistake than to make it, trust me on this. 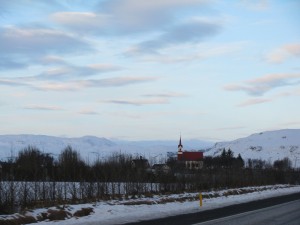 Consonants in Icelandic are pronounced sharply, often with an added “h” which is made by pronouncing the letter and then “blowing” through it. This happens especially at the beginnings of words: the English “k” is in fact pronounced similarly to the Icelandic version, only in Icelandic you would exaggerate the sound, making it into a “kh”. The word kaka (= cake) sounds more like “khaaka”, to name an example. Other consonants that work this was are “t” and “p”, so imagine you’re saying “th” and “ph” instead. However, there letters lose the “h” sound if they’re not the first letter of the word – (að) tapa (= to lose) has a sharp “t” and a softer “p”, “thaapa”.

“F” is a consonant that’s rarely pronounced as it is in English, unless it begins the word. Most often an “f” within a word is pronounced as “v” like in kafald, or even dropped entirely, with the exception of “fl” combinations, f.ex. fífl (= fool, idiot) where it becomes like the aforementioned “b”, sounding more like “fipl”.

The only exception to these rules can be new, foreign loan words, but with a little bit of time they tend to become sharp enough for easy use because using two different sets of pronunciation rules can be tricky**. 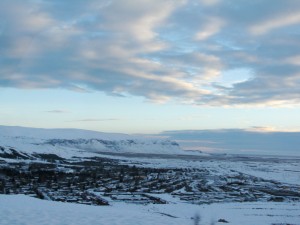 Hveragerði from above – more about Hveragerði in a moment.

Note that with double consonants the “h” sound jumps in front of the consonants instead. I’ll write more about this in the next pronunciation guide, but it may be best to learn this rule of pre-aspiration in this context. Happ (= luck) is pronounced “hahp”: the other “p” falls off and the pre-aspiration “h” gets wedged inside the word before the “p”.

And here’s what inspired me to make this post, a little video of me trying my best at pronouncing different names of snow in Icelandic for some examples. Now this reminds me of a story – 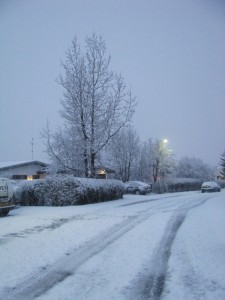 Right before the New Year’s Eve we packed our jeep to head for the countryside for a cabin party. The weather looked bad and we were a little bit unsure of how the road conditions in the south would be, there were warnings of a snow storm and we would have to pass over Hellisheiði, driving over mountains. Regardless we decided to trust the jeep and the Ring Road. 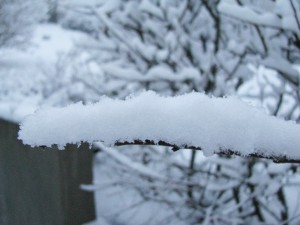 The weather turned out to be even worse than we could have imagined. The snowflakes were indeed the “dog’s paw size” -variety and the sun had already gone down. Need I tell you there are no street lights on the way? The visibility was maybe ten metres at best and the snow was piling deep on the road, making it slippery. Soon things took a turn for the worse when the headlights of our car began to dim! We did not realize this at the moment, but the protective grate in front of them was getting caked with wet, sticky snow, covering them up almost completely. 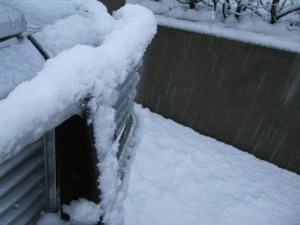 Like this, only worse: this was the jeep before we cleaned it and headed out.

There was no way to safely stop the car as there was no telling exactly where the road ended and the drop on the side began, or how deep a drop that would be for that matter. Everything was blueish white, there was no shape or form to our surroundings what so ever. We even contemplated turning the car around and heading back to Reykjavík but in the end we made the decision to drive at least to Hveragerði (it would have been dangerous to turn the car around in the middle of nowhere, in thick snow and by now almost zero visibility) because we could still see the reflectors that marked the sides of the road. 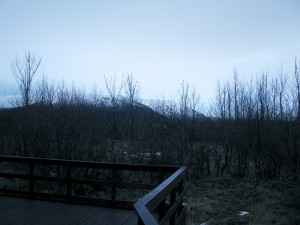 The amount of snow at the cabin once we got there…

Getting there we quickly located the problem with the lights and cleaned them, and then had a coffee at the local gas station. I asked a lady who was working there how she thought the weather would be from there to Selfoss and she shrugged and told me it was “not very bad”. By the way, I do recommend always trusting the locals on this. If they say driving to place A is a bad idea, don’t do it. If they think it’s safe it probably is, and this time was no exception. Soon after Hveragerði the snow storm died out, turned first to sleet and then to rain… at the cabin there was no snow what so ever. 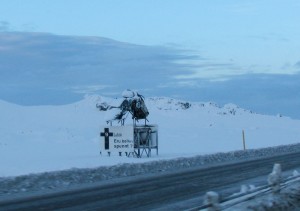 A sign reminding you to wear the seat belt.

This really is Icelandic weather in a nutshell, it’s all about extremes. When it snows in Reykjavík there may be a storm 20 minutes drive away, and there may be a mildly rainy and warm area just as near the storm. Goes to show that you can never know. Read the weather forecasts and listen to them on the radio, always have a shovel and a bag of sand with you when driving during the winter and most importantly… always take the locals’ advice. Stay safe. 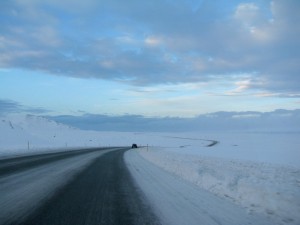 * “Ha” translates as “excuse me, would you mind saying that again?”

** A good example are Japanese loan words used in English, f.ex. karate or kimono. They mean the same thing in both languages, yet the English user is likely to use English pronunciation rules. The same tends to happen with Icelanders who like to use English loan words in spoken language.