Personal pronouns, or how polite can be rude. Posted by hulda on Jan 23, 2013 in Icelandic culture, Icelandic customs, Icelandic grammar 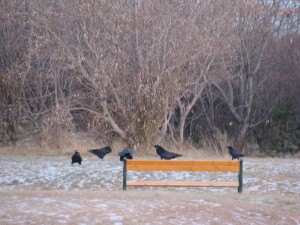 Personal pronouns – something that should be among the easiest things to learn in almost any new language – take a surprising amount of time to learn when it comes to Icelandic. This is partially because of the many declensions they have, but also because there are two different sets of them in use depending on how much formality a situation demands.

The singular ones are the same in both sets: ég, þú, hann/hún/það and so are their declensions. The first and second person plural is where the differences are. The forms that you learn first are no doubt við, þið (þeir/þær/þau) as they’re used in everyday speech, and in general you’ll need them far more than the other set which has almost disappeared from daily use. Our teacher says that as a child she was still taught both sets, but that she’s never in her life heard anyone actually use them to address another person in a polite manner. Yet it’s important to both learn them and know the situations for when they’re used, because getting them wrong has a high chance of being insulting, and not in the way you’d think!

These words mean technically the same as við and þið with that aforementioned exception that they are, technically speaking, considered more polite. Their declension goes:

Regardless of the fact that they’re considered polite, these forms should not be used in daily speech. Not even to show respect to someone above you, or maybe I should say especially not in that occasion. The unusual set of personal pronouns is only used when addressing people as a large group and often only if the person addressing the people has some kind of authority over them. You will see them used in f.ex. official letters, holidays’ greetings from large companies, invitations, prayers and other religious texts. They are so formal that using them towards another person will make you seem uppity, pompous, or wanting to show off that you’re better than them. 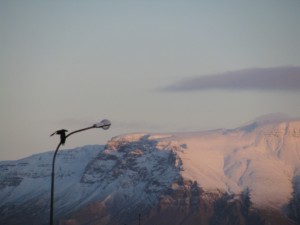 It may sound odd, but consider it this way: Icelanders are very, extremely equal. The president is in the phone book. If you meet Björk and say hi she’ll likely greet you back without a second thought, and the place where you’ll run into her might well be a grocery store**. Our mayor wears skirts as a political statement and has lately been seen jumping into a swimming pool with his clothes on (start watching at 3.00)***. Ok, Jón Gnarr might just be a little bit eccentric, but you’ll catch my drift. Drawing attention to any difference in social standing is a big no-no.

So what good is it to learn words you should immediately stop using before you even do? The answer is that it helps you understand the language and the people of Iceland better. More importantly it also helps you to avoid making severe mistakes in conduct, because just reading the translations from a dictionary won’t tell you that for Icelanders “formal” may actually equal “rude beyond belief”. There are occasions when you’ll still need to use these formal versions too, for example if you’re Christian and religious you’ll find that Faðir vor (= The Lord’s Prayer) and many other prayers use them. Another typical example might be the national anthem Ó Guð vors lands. The video in the link has subtitles in both English and Icelandic, it might be a fun language exercise to listen to it and maybe even practice singing it.

And of course when the economy collapsed the mótmælendur (= protesters) were quite formal about their signs!**** 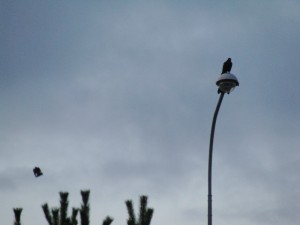 My apologies for all the ravens in this entry – they’re back in the city for the winter and I can’t get over how beautiful they are. Naturally this makes me want to a) take loads of photos of them and b) show those photos to everyone.

*Once upon a time both forms of personal pronouns were used, with slightly different meanings between them. The pronouns við and þið used to mean only two people: you and I, together we two are “við“. But if we add one more person we’re already “vér“.

**I may have seen her at the fruits and vegetables section far more often than I’ve seen her perform.

****The phrase “Vér mótmælum allir” actually comes from the National Assembly of 1951.