A naked tourist on the Prime Minister’s lawn. Posted by hulda on Jan 31, 2013 in Icelandic culture, Icelandic customs, Icelandic grammar

One of our current classes is now focusing on what makes written text difficult to read. The most obvious causes are very topic specific vocabulary (that can make the text hard even for the locals), proverbs and idioms that are impossible to understand unless you already know what they mean etc. Then there’s the word order. Icelandic is one of those languages where you can change the order of words almost any way you please without actually changing the meaning of the sentence, for example:

The English-speaking are already at a slight advantage here since English as a language is wonderfully flexible, but Icelandic still comes with the additional hurdle of cases. Those are what makes the meaning stay the same. They may be hard to spot from the text and even at best they make reading somewhat slow, because text where the words are in an “unusual” order often requires you to double check your own understanding of it while you read. Besides this the sentences in Icelandic are often amazingly long and have very few commas to break them into thought-size chunks. A great example of this in a police report from the Facebook page of the Reykjavík police that describes an exceptional night in 14th December, right in the middle of the Capital City. A naked man was caught running around the Prime Minister’s Office!

After watching him jog a couple of rounds they managed to get “their hands in his hair since there were few other parts to grip in sight”* to ask him what anyone would have wanted to know the most; what on earth was going on? The story began to unravel and perhaps unsurprisingly there was a woman, or in fact two, behind it.

(= There, on his way, was a young tourist dressed in nothing but socks.)

Let’s now break this sentence down a little, and translate it as word to word as possible without completely losing the meaning: 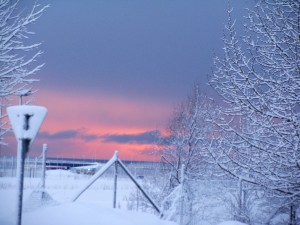 With the police involved, the young man became very sorry for what he had just done and explained what had happened. He had met two Icelandic girls in a bar somewhere about the town.

(= The man said that the girls had dared him to shed clothes and run on the aforementioned grass, and they assured him that that was normal behaviour in Iceland. And in sincere wish to help him they had offered to hold his clothes until he’d get enough of running.) 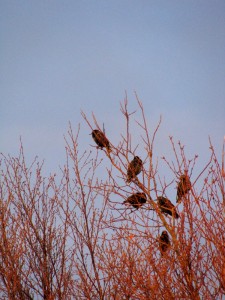 What happened next was that the girls cheered him on happily and then legged it as fast as their feet could carry. With his clothes still under arm, of course.

(= He was taken to the police station wrapped in a blanket and he had trouble to present his ID as the wallet was in (the pocket of) his trousers, that were in the hands of the girls.)

Var honum komið á lögreglustöðina: he was taken to the police station**
vafinn teppi: wrapped in a blanket
en hann átti í erfiðleikum með: but he had trouble to
að framvísa skilríkjum: to present an ID
enda veskið í buxunum: since the wallet in the trousers
sem voru í höndum stúlknanna: that were in the hands of the girls. 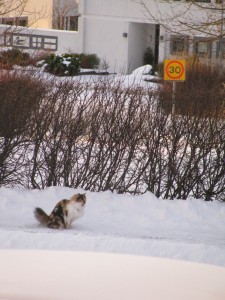 Indeed, things did not look very bright for him, but in the end they still took at least a turn for the better. Icelandic girls may pull your leg as many ways as you let them, but it would seem that they’re not thieves.

(= The story still ended better than it at first seemed like when as he was dropped off at his hotel, were his clothes were waiting for him at the reception, the girls had, however, disappeared.)

Let this be a lesson: if anyone, in any country, is trying to make you do something that sounds a bit outrageous and insists that this is toooooootally normal, be very, very suspicious!

By the way, this young man very nearly made it as the Tourist of the Year in Reykjavík Grapevine’s annual election.***

The news article for this story is here.

*This is exactly how the police put it.

**Here’s a great example of the word order shift that I mentioned in the beginning.

***He was bested by an Asian lady who lost and found herself in Iceland without ever noticing anything special going on.