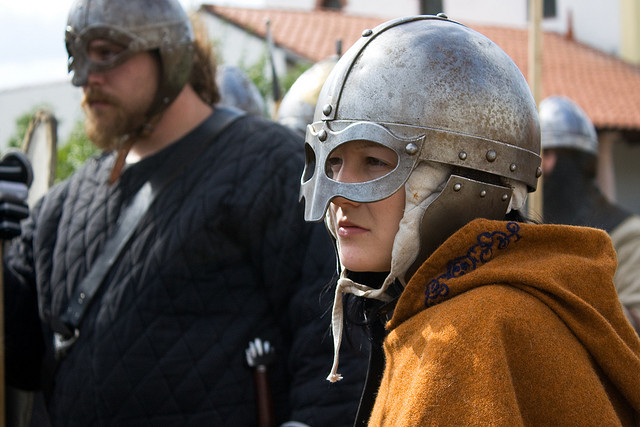 What would be the biggest difference between Medieval Icelandic women who fought using weapons as opposed to using their wits? I’d say it would be in the amount of casualties. Let’s count!

Auður is one of the most loyal wives of all sagas. Not only does she fight alongside her husband but also refuses to betray his whereabouts to his enemies, not even when faced with threats of maiming or death. Bribery doesn’t work either, one of her injury count actually comes from smacking a man in the face with a bag of silver that he offers her so she’d tell him where her husband is hiding. She may have in fact caused more injuries: at the final battle she fights an armed warrior wielding only a club but the warrior still fares badly against her. Besides he’s wearing whatever men wore when they went to a battle, she’s wearing a nightie.

When her husband insists that she serve her brother’s killer food Þórdís becomes the only known woman of the Icelandic sagas who actually uses a sword. Seeing her dead brother’s sword with his murderer Þórdís feigns dropping a box of spoons, bends down to pick them up but grabs the sword instead and attempts to run him through with it. The only thing that saves his life is that a table is on the way and therefore she merely cuts him in the thigh. 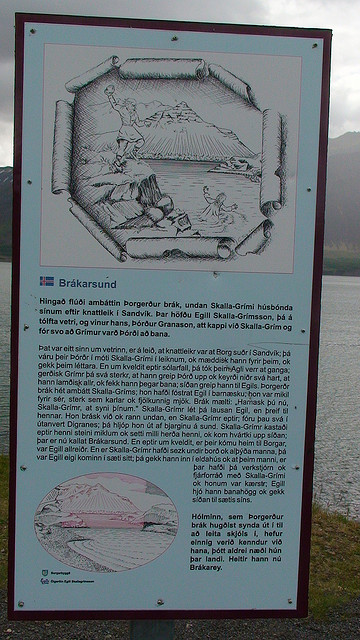 Brakarsund by Luc Van Braekel on Flickr. Skalla-Grímur is throwing a rock at Þorgerður brák who’s seen trying to swim to safety.

Wait, why am I mentioning this lady? For one reason – she went alone and unarmed against Skalla-Grímur who was in full berserk rage. He was attacking his own son Egill and would have killed him had Þorgerður stopped him. He then turned towards her instead and drowned her in a place now known as Brákarsund, named after her. She may not have caused any damage but there’s no way that wasn’t a courageous move, especially considering that among all the people gathered she was the only one who dared to step in.

Upon seeing a man attempt to assassinate her son she attacks him and bites him to death. Yes, that’s what happened. 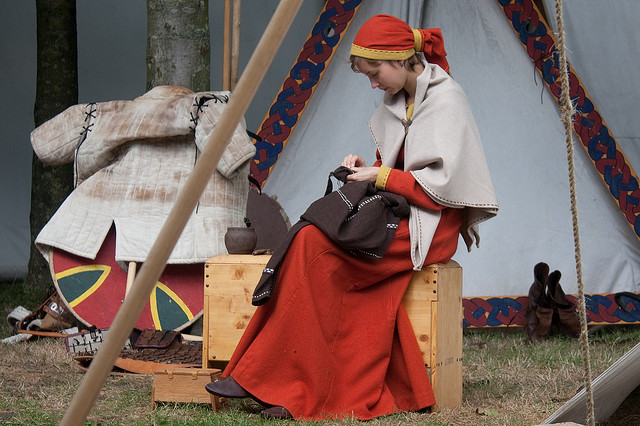 Deaths – 0, Injuries inflicted – not mentioned but likely many.

Steingerður and Kormákur’s love story is somewhat unusual: first they’re engaged to be married but due to a curse Kormákur breaks off the engagement. Steingerður is married to someone else, at which Kormákur stops at nothing, following her and occasionally harassing her (on at least two counts forcibly kissing her). At one point he hits her husband on the head with an oar and Steingerður takes this so badly she steers their ship over Kormákur’s, capsizing it. No one dies, the saga says, but only because there are other ships nearby to save Kormákur’s crew.

Here we finally have a woman who deliberately takes on a man’s role as part of her vengeance. Her husband Þórður falls in love with another woman and divorces Auður on a lie that she’s a cross-dresser. Auður then indeed dons men’s clothes and attempts to murder Þórður in his sleep. Only luck saves his life and he gets gravely wounded, his arm never healing completely. This act by Auður is curiously not only praised by her brothers but also accepted by Þórður himself, who says she did only as she should have done.

This one’s a real piece of work. On one hand she stands up against a group of natives while heavily pregnant; she’s that saga lady who cuts her shirt open and presses a sword against her bare breast, spooking the attackers to retreat. On another she also kills five unarmed women with an axe because they’re witnesses to her earlier plotting that lead to the deaths of their husbands and other men in their group, 60 altogether.

Kjartan’s death by Andreas Bloch on Wikimedia Commons. A far more typical casualty of a saga woman hellbent on revenge.

This actually brings me to the next point, casualty comparisons between women who fought with weapons and those who used the more typical fighting styles of Medieval Norse women that I spoke of in the previous part.

Deaths – at least 6 , Injuries inflicted – many.

Deaths – at least 7, Injuries inflicted – many, also it could be said it was Bergþóra who began the hostilities by publicly humiliating Hallgerður.

These two stand together because they waged a war against each other. Not alone, mind you, there were other people who had their interests in the battles and sought to further stir things up. It’s also possible I may have overlooked some deaths because the saga is long and many, many people die in it! Most of the deaths here are caused by sending men to kill others, which is actually something that men in sagas do far more often than women – women typically ask their male family members to avenge a death, but Bergþóra and Hallgerður actually command forces just like chieftains of their time would have done. 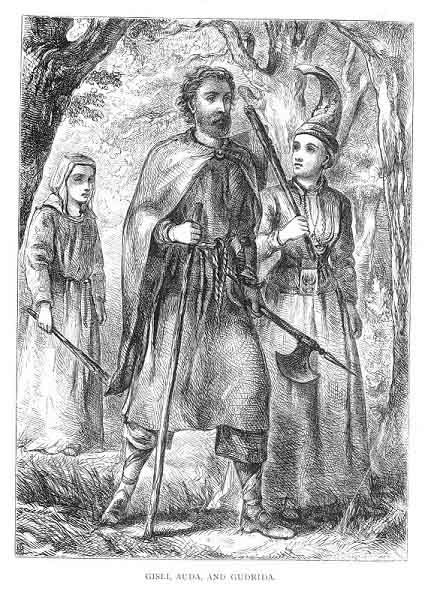 Gísli, Auður and Guðríður their foster daughter from Wikimedia Commons. Note the clubs the ladies are carrying!

An example of a more traditional role is Hildigunnur Starkaðardóttir, whose uncle Flósi does not agree to avenge her husband. She then fetches her husband’s cloak into which she mopped up his blood and body parts, and throws it over Flósi. At this he can no longer back off from the deed, so we can maybe set Hildigunnur’s casualty count to 6 – Bergþóra, her husband, their three sons and a nephew. It’s thanks to this lady that the whole burning from which Brennu-Njáls saga takes its name happened.

And of course there’s Guðrún Ósvífsdóttir from Laxdæla – the very same whose second husband was the aforementioned Þórður. Death count at 4 but injury count through the roof, Guðrún’s not only one of the smartest but also most ruthless. She has Kjartan, the love of her life killed in revenge to him humiliating her, stands up to the murderer of her husband when he wipes the murder weapon clean on her clothes and eventually sends her 12-years old son to avenge his father’s death. Near the end of her life her son asks her which one of her men she had loved the most, to which she gives the famous reply “Þeim var eg verst er eg unni mest” – the one I treated the worst was the one I loved the best.

Previous parts of this series: