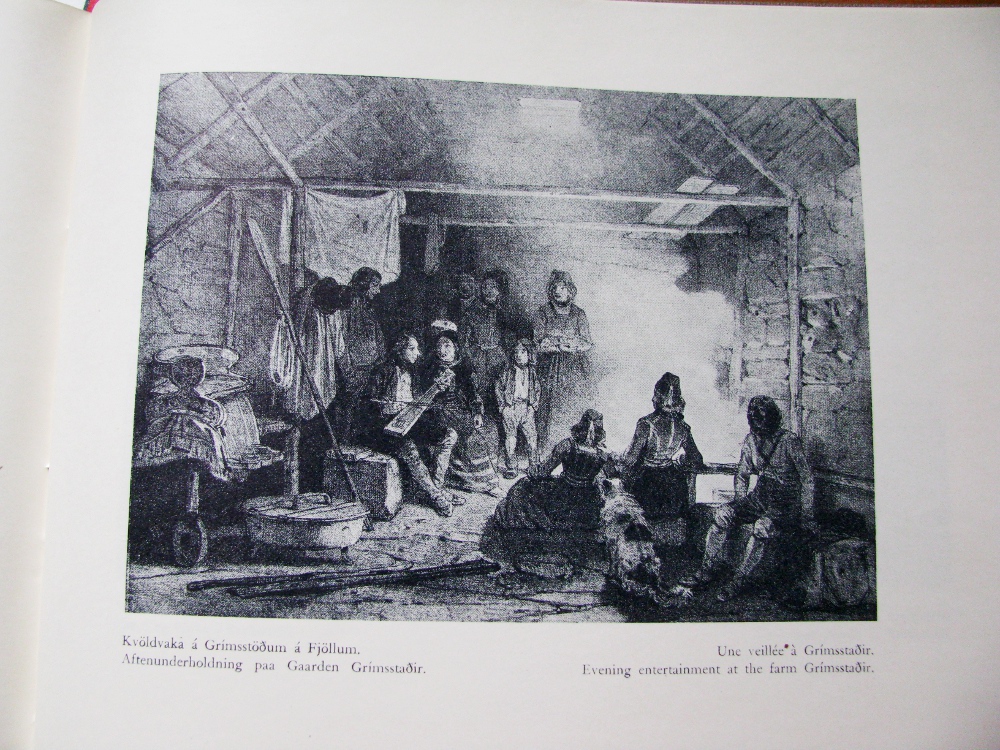 An evening with a traditional Icelandic zither langspil and singing.

The most famous love poem of Iceland is written by a woman. Though little is actually known of her the amount of legends that circle around Rósa Guðmundsdóttir, also known as Skáld-Rósa (= Rósa the poet) or Vatnsenda-Rósa (= Rósa of Vatnsendi), would suggest she was a striking and noteworthy person in her time just the same. Today she may be considered among the most famous of Icelandic poets of all times but at the time she lived and wrote she probably didn’t even expect to see her work printed.

Who was this remarkable lady after all? Born 1795 to a family living in Hörgárdal area, Rósa was taught not only how to read but also how to write, a rarity for the Icelandic women of the past. Wait, what was that? To know how to read but not how to write? Yes, that’s exactly what woman’s education used to be like and there’s a possible explanation for why, in a country known for its long tradition of both sexes composing poetry on a spot, most of the published poets were male.

Rósa’s mother died as she was but 12 years old and soon after she left home to work as a servant in Möðruvellir. This is where one of the most known legends of her began, that she met and fell in love with Páll Melsted, and the legend also states her most famous love poem Vísur Vatnsenda-Rósu was written with him in mind. Páll moved to Copenhagen to study when Rósa was around 15-17 years old and was already engaged at the time to another lady. Upon his return Rósa was hired at their service and eventually Páll was the spokesman at her first marriage – yet the first child of Rósa was named Pálína, a name that’s essentially the female form of Páll. 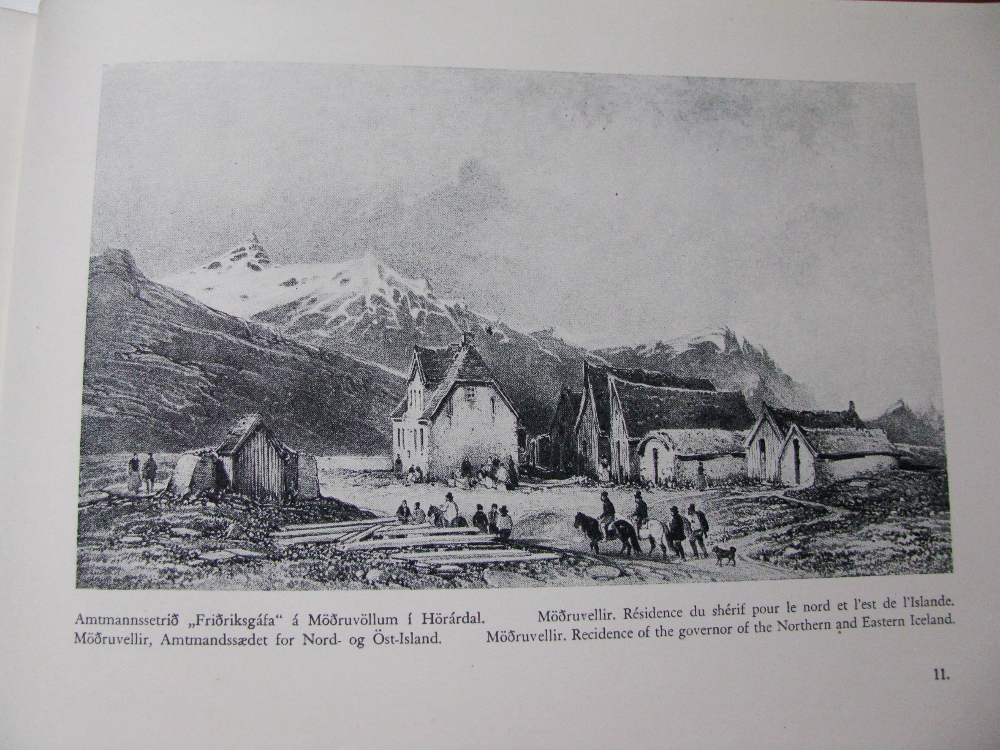 This is how Möðruvellir looked like back in Rósa’s day.

The marriage of Rósa and her husband Ólafur Ásmundason was not an easy one. Rósa had an affair with a man called Natan Ketilsson, a known ladies’ man, and some of her children were rumoured to be his instead of Ólafur’s… one, Súsanna, definitely got Natansdóttir as her official patronymic. Rósa admitted to the affair in a trial in 1827 but Ólafur forgave her so that their marriage could continue. Eventually the couple divorced in 1837.

What about Natan then? He left Rósa in 1826, got involved with other people and was murdered in 1828, a case that is now known as the last murder in Iceland where the murderers were executed for their crime.

Rósa became a midwife, known for her skills, just as her own mother and grandmother had been. Later on she went to study midwifery and graduated, settling down with Gísli Gíslason, a man 20 years younger than her. Though this relationship seemed to have a warm start it was also said that Gísli drank heavily and abused his wife when drunk. The marriage however lasted until the year 1855 when she got ill and died at age 60. 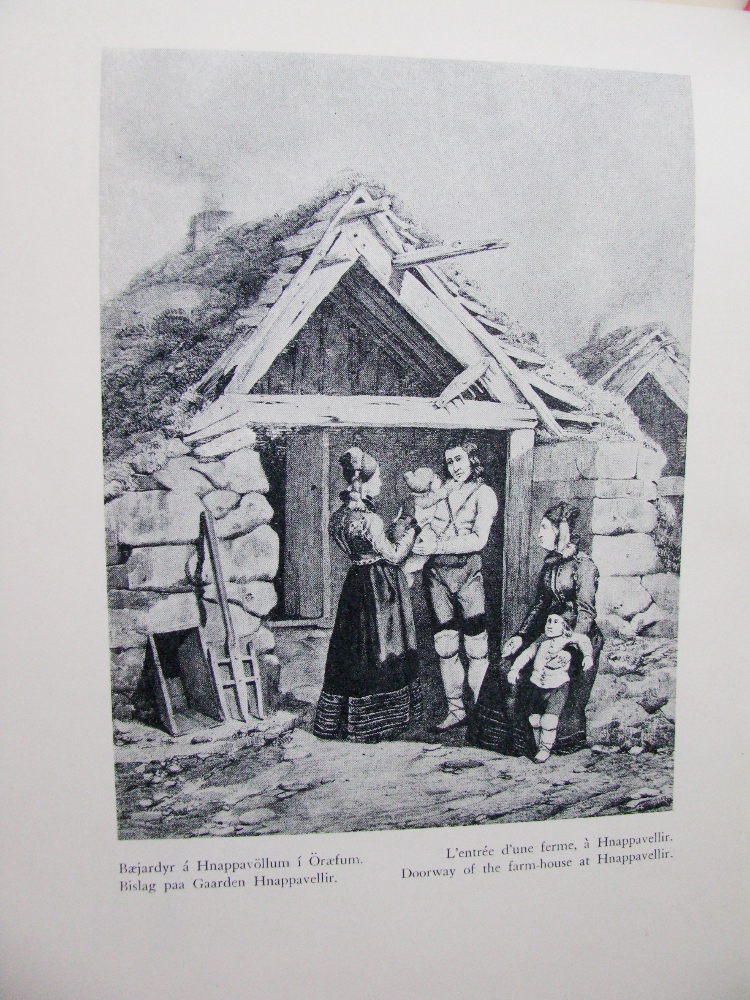 A typical Icelandic couple with children in the mid 1800’s.

Vísur Vatnsenda-Rósa is actually much longer and has changed in both grammar, spelling and even order of verses over the years, but the three most famous ones usually go:

Augun mín og augun þín, (My eyes and your eyes)
ó, þá fögru steina (oh, those beautiful jewels)
mitt er þitt og þitt er mitt, (mine is yours and yours is mine/what’s mine is yours, what’s yours is mine)
þú veizt, hvað eg meina. (you know what I mean)

Langt er síðan sá eg hann, (It’s been long since I last saw him)
sannlega fríður var hann, (truly he was beautiful)
allt, sem prýða mátti einn mann, (everything that is good in a man)
mest af lýðum bar hann. (most of it he had)

(Original form of the poem can be found here. You can listen to this song here, it’s Ragnheiður Gröndal’s version.) 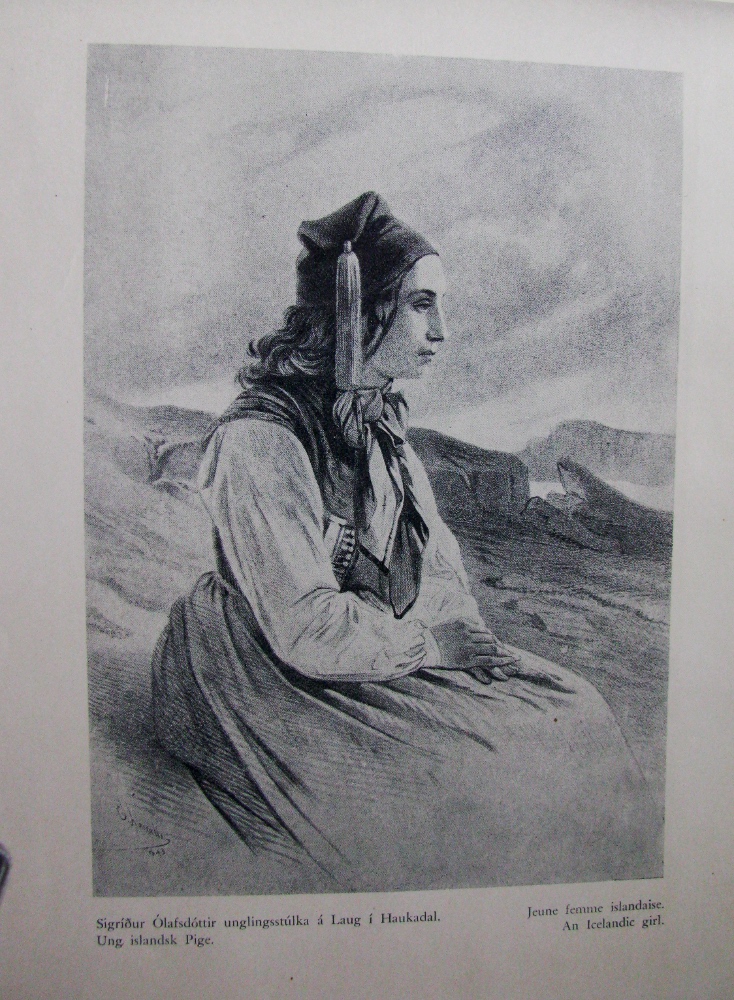 As a curious coincidence this lady, usually only called “Icelandic girl”, is here named Sigríður Ólafsdóttir. She comes from the same general area as Rósa, but what makes her interesting is that she’s a full namesake to Rósa’s third daughter, and by the time when the picture was made Rósa’s Sigríður would indeed have been around this age!

And then for last week’s quiz! Fyrir in each word will mean “before”, “over” or “above”.

fyrirboði = omen (I guess the closest translation might be “before-available” or “before-offered”)
fyrirburi = premature baby (bera = to carry, a verb also used for pregnancy)
fyrirbyggja = prevent (byggja = to build – built-before = prevented)
fyrirfólk = high society (fólk = people; fyrirfólk = people above)
fyrirfram = in advance (fram = forward, forth; before going forward)
fyrirgangur = boisterousness (gangur can stretch to mean any kind of a wild behaviour, you’re “over-running” others)
fyrirgefa = forgive (gefa = to give, I think this word works very similarly to the English forgive, actually!)
fyrirhuga = a plan (hugi = thought; before-thought)
fyrirhyggja = forethought (very much like above)
fyrirlesari = lecturer (lesari = reader; the leader who stands in the front)
fyrirmæli = instructions (mæli = measurement; before-measured)
fyrirrennari = predecessor (renna = to slide, to move; fyrirrenna = to move before others do)
fyrirsát = ambush (sitja = to sit; to sit somewhere waiting for someone)
fyrirsæta = model, sitter for a portrait (sæti = seat; seated in front of others)
fyrirvari = notice, warning; taka með fyrirvara = take with a grain of salt (að vera var við = to beware, to be aware; before-awareness)
fyrirætlun = intention (ætla = to plan to do something; before-planned)